She, Mia Griffin and Fiona Mangan monopolised the top three steps of the podium in Kanturk, with Caoimhe O’Brien (Torelli-Assure-Cayman Islands-Scimitar) finishing fractionally behind Mangan in the sprint and then crashing just past the finish line. She was fortunately relatively unharmed, and congratulated Sharpe on her win.

Sharpe previously took the title in 2019 and was delighted to do so again. “It feels just as good, if not better, because I had a few years in between where I either wasn’t racing or other people were better than me,” she said. “It is good to get back into the jersey and prove that I can still do it.”

Another IBCT rider Megan Armitage was very strong, having prepared specifically for the race in Girona in Spain, but wasn’t able to break the elastic during the race. She launched an attack inside the final two kilometres but was brought back, setting things up for a sprint. Sharpe described how things then panned out.

The event began under drizzling rain and had periods of rain interspersed with dryer conditions. The riders did an opening lap of 59 kilometres and then three laps of a 15 kilometre finishing loop, with a tough hill coming soon after the start of the latter and another uphill ramp leading to the finish line.

Early attackers included Danielle Forshaw (Gorey Cycling Club) and Vanessa Fursden (unattached Ulster), as well as a solo move by Carthach McCarthy (Blarney Cycling Club). After a period of time out front she was joined by Becky Woods (All Human/VeloRevolution Racing Team) and Emma Porter (UCD Cycling Club), and opened a gap of 50 seconds over the peloton.

Porter later slipped back, and the two leaders were subsequently reeled in by the peloton. Becky Woods (All Human/Velo Revolution Racing Team) and Roisin Lally (Loughborough Lightning Cycling Team) jumped away before the end of the 59 kilometre loop and were clear started the first of three laps of the finishing circuit, but first Lally and then Woods were hauled back by the IBCT-led bunch.

IBCT kept turning the screw, with others such as McCrystal also putting in digs. Those efforts, the tough weather conditions and the attrition of the course eventually whittled things down to an eight-rider group, out of which Sharpe was best.

She said that having so many strong IBCT riders was helpful.

“It definitely was. Even just to have the presence in the race and the jersey, to be assertive. Definitely. And it was good for us to all be able to come back and race at home, because we will always be away in Belgium. And it is a different style of racing. So it was good.”

The Irish-registered Belgian-based squad was clearly strongest with three podium placings and took the team award.

The Cycling Ireland National Road Championships conclude on Sunday with the Elite and Under 23 men’s road race. It will be held over 163 kilometres, and uses the same tough finishing circuit that enlivened the racing today.

5, Linda Kelly (Spin the Bean Power by Coffee) at 3 secs

Alice joined us on the Tri Talking Sport Podcast earlier this year. You can tune in here. 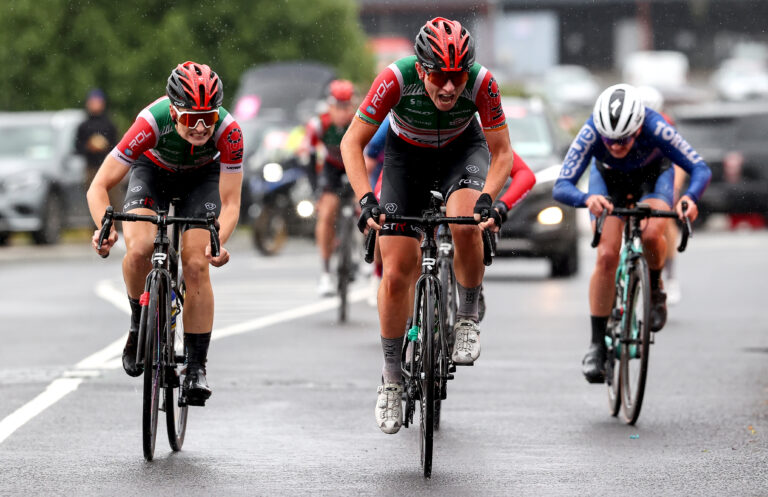