Archie Ryan had a superb final two days at the Tour de l’Avenir, taking a career-best performance of second place on Saturday’s stage to La Toussuire and then moving from fifth to a superb fourth overall on Sunday’s concluder.

Racing with Team Ireland, Ryan’s climbing talents were on full display at the race, which is regarded as an under 23 version of the Tour de France. It has been won by some of the biggest names in the history of the sport and Ryan’s prominence is testament to his promise.

Indeed this is Ireland’s best-ever performance in the race. Stephen Roche was sixth in 1981, and Eddie Dunbar was eighth in 2018.

Ryan was fifth on Friday and then was the only rider able to stay with the Belgian rider Cian Uijtdebroeks on Saturday. The two of them went head to head on the final climb of La Toussuire.

Uijtdebroeks ended up getting the victory, sprinting in two seconds ahead of Ryan and taking over as race leader, but Ryan’s competitiveness shows how much he has thrived since getting over a persistent knee problem.

Uijtdebroeks successfully defended his yellow jersey on Sunday’s final stage, riding strongly over the famed climb of the Col d’Iseran. The altitude of the 2,754 metre high climb put pressure on Ryan and several others, but he fought back and then unleashed a big surge inside the final kilometre of the stage.

This attack saw Ryan and two others gap the race leader and six others in group. Six breakaway riders had stayed out front until the end, putting Ryan a fine ninth on the stage.

He moved up one place to a superb fourth overall, overtaking the Italian rider Davide Piganzoli in the general classification.

Ryan ended the race two minutes 49 seconds behind race winner Uijtdebroeks and just 49 seconds off a place on the podium.

“I am really happy with the result, especially the general classification today,” he said. “It was just maintaining it, in a way. It was a good day today, I managed to position myself well all day.

“The finish climb to the end was pretty short and pretty shallow in the middle section, so it ended up being a small group sprint when the break stayed away.

But I am really happy with the GC result. I can’t complain. If you told me before the race that I’d do that, I would have taken it, for sure. Before the race I wanted to be fighting for the podium, top five, so I hit that on the head, basically, which is really, really great.”

“Thanks to the boys for their support and the staff who have just been amazing this whole trip,” Ryan said. “I couldn’t have done it without them. It has just been really, really cool to do it and be part of this great squad. I am super happy with the race in general, it was just brilliant.”

As for the other riders, Rafferty and Harvey were on the attack at several points during the race. Rafferty also won the most aggressive rider award on stage three.

“I am very happy for Archie,” said team manager Martyn Irvine. “We knew he would be the man in form and he had the skills and confidence and ability to back it up. From day one that was the plan, and he executed the plan. Obviously he would like to have been one or two steps higher here and there, but I think he’s satisfied with his ride. He’s proven he’s one of the best climber amongst his peers, and it’s just to help him get there.

“He did all the work himself, he is very professional. He ticks every box – looks after himself, eats, sleeps. Just everything…a top level professional bike rider. And that all paid off to give him a good performance today and this week.”

Ryan was ultimately the only Irish finisher in the race, with crashes and sickness contributing to the difficulties.

“Obviously there was a flipside for the rest of the team,” Irvine said. “We had a bit of bad luck. There was sickness going through the race. We had some very long climbs that weren’t suited to our riders, and that caught us out yesterday. We had a bit of everything yesterday. We had lads outside the limit, some sick, and then on the flipside Archie getting second place on the stage.

“So it has been an emotional rollercoaster. But we are all here tonight, we are all pretty happy with the week’s work. And that’s it. It was great to work with the lads, every one of them was a pleasure to work with on my part.”

Ryan is already part of the Jumbo-Visma Development Team and his performances in France will only further boost his standing in the sport. A big pro career seems more and more likely.

“I can imagine there are bigger and better things ahead for Archie,” said Irvine. 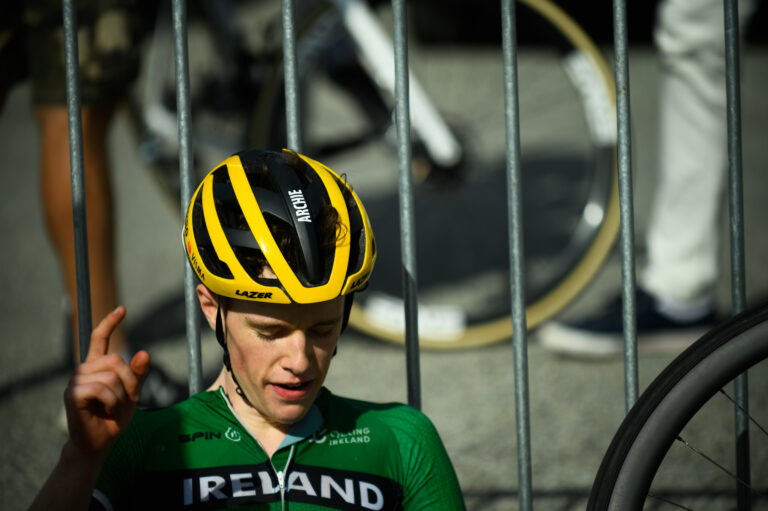