The Middle Distance National Champs at TriTyrone had it all, stellar performances, epic battles and two new course records!

The quickest middle distance in Ireland didn’t disappoint and delivered a day of top-class racing across both the men’s and women’s fields. Fast and flat certainly doesn’t mean boring, with placings changing hands numerous times throughout.

Not even a detour on the swim course and a fall at the dismount line could impede Niall Cornyn’s progress today as he retained the Middle Distance National Championship won on the same course last year.

Aichlinn O’Reilly and David Sheridan worked as a pair throughout the swim and had a two-minute lead on the rest of the field at the end of the 1900 metres. Alan Maher, Niall Cornyn and James Hoare were the next group out of the water and onto the bike course.

O’Reilly pulled ahead in the early stages of the bike and for the first two laps had a two minute lead over 2019 race winner David Sheridan. Niall Cornyn was 30 seconds back in third at this point. Michael McCarron was also making his way through the field from seventh after the swim.

The closing kilometres of the bike saw Cornyn take the lead with the fastest bike split of the day (2:12:39). O’Reilly was second into and out of T2 and Michael McCarron third. By the run midpoint McCarron had moved into second, O’Reilly third and Sheridan in fourth.

Going after the course record on the run course, Niall Cornyn succeeded in an impressive 3.58.29, breaking Bryan McCrystal’s 2017 course record of 4 hours 3 minutes. Michael McCarron earned a silver 2022 National Champs medal in 4:07:31 and Aichlinn O’Reilly battled hard on the run for his bronze medal in 4:11:27.

Shoutout to eventual fourth-placed Anthony O’Brien who was 58th after the swim, making up an incredible 54 places on the bike and run! David Sheridan crossed the line in fifth.

Hughes Does the Triple

Adding to her 2019 and 2021 medals, for the third time in a row Hilary Hughes is the Middle Distance National Champion. 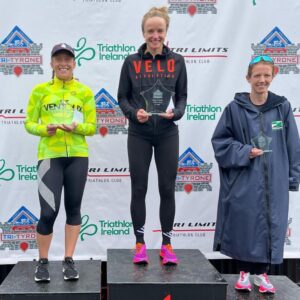 Marie Duffy from 3D Triathlon Club was first out of the water in a 34:56 swim. A minute back Ciara Wilson and Hilary Hughes entered T1 together and headed out onto the notoriously quick bike course.

By the end of the first of three bike laps, Hughes had already gapped the rest of the field by nearly 10 minutes and didn’t look like she was going to be caught.

Behind Hilary Hughes, the battle had begun for the remaining podium spots with Eithne McGorman overtaking Ciara Wilson and moving into second around the 60-kilometre mark. Claire McGonagle was also making her mark and in the closing stages moved into second with a 2:34:14 bike. McGonagle’s split was bettered only by Hilary Hughes. Pulse TC’s Clare Dillon was fourth into T2, Ciara Wilson fifth at this point.

Onto the run and Hilary Hughes had extended her lead to 16 minutes, travelling comfortably. Still extending this lead over the run, Hilary Hughes crossed the line in an impressive time of 4:29:28 to win TriTyrone for the second time and her third Middle Distance National Champ title in a row. Next up for Hughes is her second IRONMAN Pro start at IRONMAN Cork in August.

In 2021 Eithne McGorman battled with Catherine Sands on the run to earn her silver medal, and this year she would need to close the gap to Claire McGonagle. Setanta TC’s McGorman earned a 1:32:44 run split, moving past McGonagle early on and cruising home to a second Middle Distance National Champs silver in as many years.

Pulse TC’s Aine Kelly was eight minutes down on the leaders after the swim but quietly got to work moving through the field with one of the quickest bike-run combos of the day. Kelly finished fourth in a time of 5:05:29, just seconds ahead of fifth place Pulse TC clubmate Clare Dillon.

Hilary Hughes’ performance at the weekend earned her a new women’s course record, and was also the first time a female athlete went under the 4:30 mark at the middle distance event! Yet another reason to celebrate an incredible triathlon showcase at TriTyrone 2022. 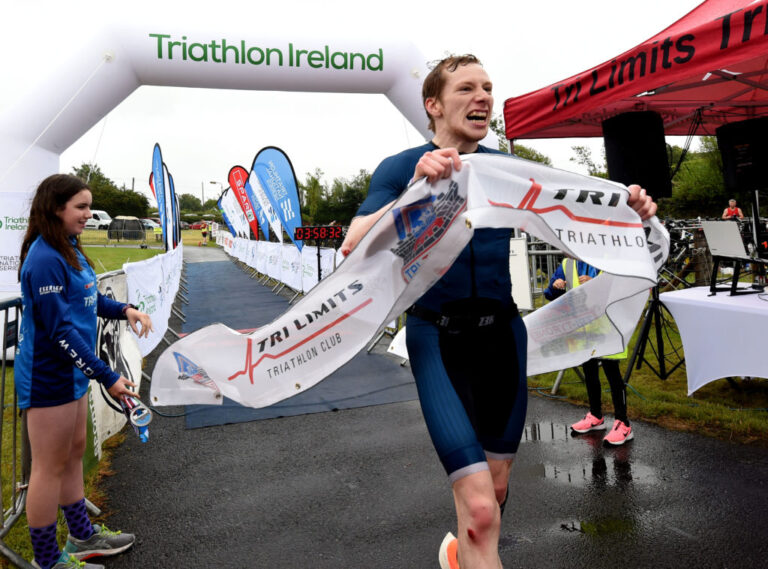