November is not usually a popular time for elite athletes to go on camp.

Unless you’re one of the very few racing the World Triathlon Grand Final at the end of the month, the season is over and it’s time to recover. Recover from half a year of pushing your body to, and sometimes past the limit. Recover from long-haul flights, from months of racing in random Mediterranean resorts or bewildering Asian cities. But in Fuerteventura, this November, Triathlon Ireland’s High-Performance athletes have been on camp. The vibe was not end of season, but start of era.

When, during the summer, Gordon Crawford signed on as Triathlon Ireland’s new Head of Performance, he arrived with a mandate for change. Crawford was tasked with implementing an ambitious vision to transform Triathlon Ireland’s Performance sphere – building a new culture that supports Ireland’s elite athletes to deliver their best; putting in place new development structures for coaching; creating pathways for talent identification which will allow youth athletes graduate successfully to elite level.

That’s why in November, a record number of athletes for a Triathlon Ireland training camp were in Club Playitas.

“The key goals of the camp were to bring the group of athletes together, to start to get them to speak to each other and learn how to work together and establish how we create trust,” Gordon Crawford explains.

Although triathlon, with the exception of the Mixed Team Relay event, is an individual sport, Crawford believes creating a team ethic is vital to improving performance across the board. He explains that creating this team culture feeds in to every activity on camp.

One of Crawford’s early actions was to appoint Ireland’s two current Olympians, Carolyn Hayes and Russell White as athlete representatives.

White got to exercise his new role unexpectedly almost from the outset, when on day one of the camp he was involved in a bike crash. It left him with a broken arm – a further set back in what has been a difficult year that saw him spend significant periods unable to train and even in hospital because of Colitis.

With his arm in a sling, White stayed on after his crash and began coaching.

“It wasn’t what I expected with the crash on day one of what was going to be a two week camp for me. But yeah, I’m currently doing my coaching qualifications so the fact that it’s not just doing it for the sake of doing it, but I’m getting an experience and ticking off some of the requirements for the qualifications.

“It’s been good to give me a mental focus, things were turned upside down and if I was still here not being able to train and not really able to throw myself into anything, it would have been more difficult. But I can still give full commitment to the camp just in a different capacity. So it’s been really enjoyable.

“There’s been good buzz on the camp, everybody’s getting what they want from it. There’s good buy-in and people are using that group environment to help each other gain the most out of the camp.”

Carolyn Hayes arrived in camp a little after it began and says she noticed that was something was different immediately.

“I think it’s a great change. It’s definitely for the better. I can see it among the staff that are here and the athletes (when) chatting to everyone one on one,” Hayes says.

“For me, it’s definitely about getting the hours in and just coming home in better shape than I’ve come. And it’s also an opportunity to get to know the new athletes that are here and the new coaches. Just being in the environment with Gordon and seeing how he operates. And I definitely think that triathlon is going to be going in a very positive direction under his guidance.”

The camp however is not only about team work and culture. As Hayes says herself, it’s a training camp and not a holiday. High Performance sport is measured by results, so how does Gordon Crawford harness success from culture?

He says it begins with challenging mindsets.

“We know what’s required to be successful at World level or at European level. But we need to get people working together to achieve that.”

Crawford continues: “And we need people to be honest on the key point, which is where are you right now? Not where people tell you are, not where people think you are, where are you right now and where do you want to get to and what processes do you have in place to help you get there? And what can we in Triathlon Ireland do to support that process and support the athlete and add value to the athlete and coach?”

Crawford says he wants athletes to treat camps as a learning environment. He describes culture, transparency and professionalism are small bits that are part of the bigger picture. Included in that bigger picture is growing the sport domestically.

“This is our vision and our mission. It’s what we’re about. We want the athlete buy into that. We want them to influence what that currently looks like and what that should look like going forward.” 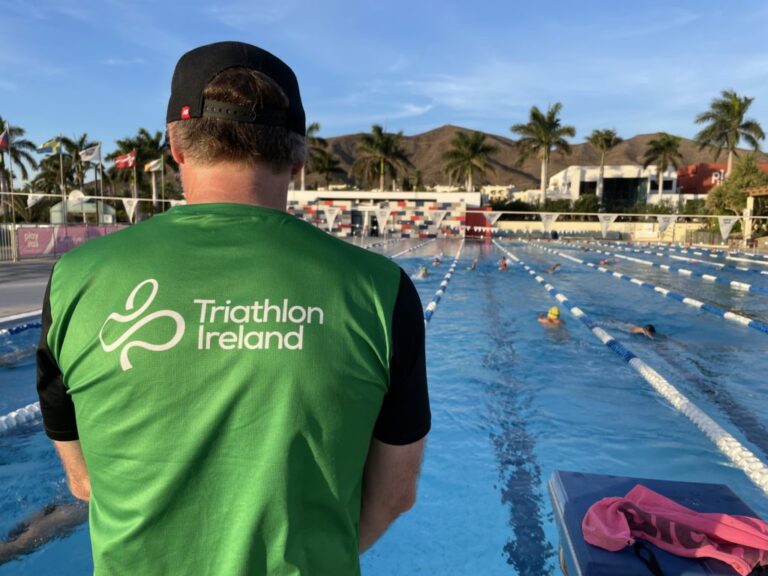