James Edgar and Estelle Perriard have won the richest race on the domestic triathlon calendar at Vodafone Dublin City Triathlon. They came out on top of an elite field competing for the Draft-Legal Sprint Distance National Championships – a race with a prize fund of €10,000.

Luke McCarron was second in the men’s race following a close battle with Belgian athlete Thomas Guilkmot in third.

In the women’s race, Ailbhe Carroll finished second to Swiss athlete Perriard, and claimed the National Championships in the process, with Shannon Kelly in third place.

Almost 900 people swam 750m, biked 20km, and ran 5km in the environs of Dublin’s River Liffey and Phoenix Park across the Draft Legal, Age Group and Aquathlon events for Vodafone Dublin City Triathlon, which was making its return for the first time since 2019.

The winners of the main Triathlon National Series event were Colm Turner and Ciara Wilson, with Anthony O’Brien and Helen Perry in 2nd, and Cormac McGarry and Danielle O’Riordan 3rd.

In the Draft-Legal event, James Edgar led the men’s race from start to finish, emerging from the water with a slender lead. He was caught on the bike by South African athlete Dylan Nortje during the 20km bike and the pair worked well together to hold off the rest of the field right through to the second transition. On the run Edgar pulled clear and moved on to a comfortable victory, completing the race in a time of 56mins and 59secs.

Behind him McCarron and Belgian’s Guilkmot overtook Nortje to make it a two man race for second place. There was practically nothing to separate the pair and in the end there were just seven seconds between them with McCarron claiming a major result with second place ahead of Guilkmot.

Speaking after the race, Edgar said having Nortje with him on the bike was a major help in establishing the slender lead he gained from the swim. “We just spent the whole 20km and 30mins just drilling each other. It was nice to get out on the run knowing that it was almost sewn up so long as my legs co-operated.”

In the women’s race Irish elite representative Chloe Pollard was the early leader out of the water followed by Ailbhe Carroll and Switzerland’s Estelle Perriard. Perriard and Carroll made their move on the bike, overhauling Pollard who was unable to stay with their pace. Perriard and Carroll matched each other pedal stroke for pedal stroke until transition but on the run Perriard turned up the heat, dropping Carroll after the first kilometre and eventually carving out a solid lead before the finish line.

She won the race with a time of 1hr 3mins and 49secs. Carroll was second on 1hr 5mins 37secs while Shannon Kelly ran herself on to the podium, claiming third with a time of 01:07:55.

Perriard said she found the swim rough and had some catching up to do once she recovered her composure but she said that her partnership with Ailbhe Carroll on the bike left her in a strong position to go clear once she started the run. “The run was quite comfortable. This hasn’t been the best season, I had COVID at the start and have been struggling to get back so this is my first race back, it’s good to get back and have a win.”

Provisional Results for Vodafone Dublin City Triathlon are now up on SportsSplits.com 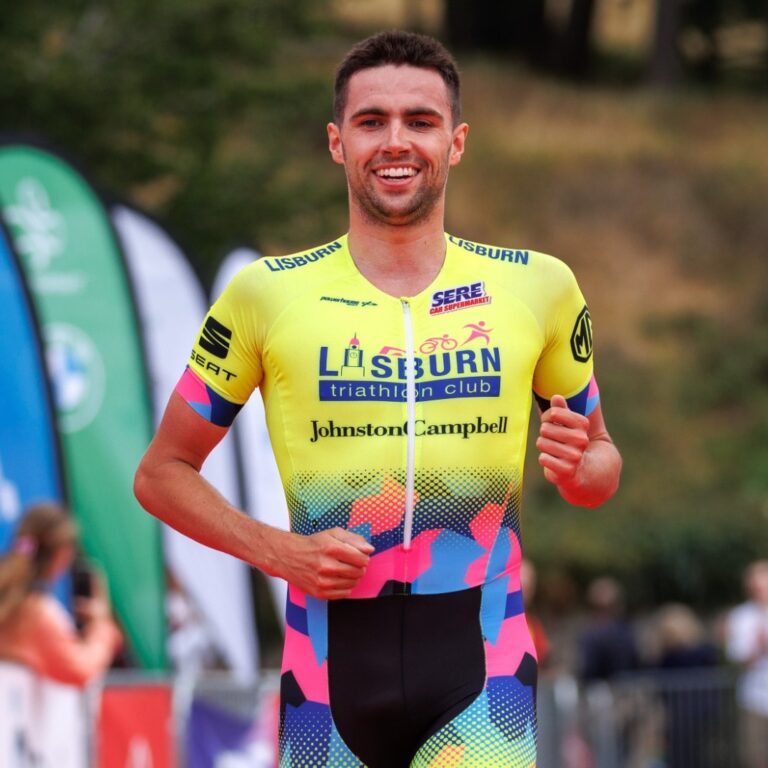