Galway Girls On The Road To The IRONMAN 70.3 World Championship

Natasha Carrick and Rose Lynch to race the IRONMAN 70.3 World Championships in Utah at the end of this month.

The IRONMAN 70.3 World Championship takes place in St. George Utah on the 28th and 29th of October and two of Galway’s top female triathletes have qualified to race on the world stage at the end of this month.

Natasha Carrick, born and bred in Galway and Rose Lynch from Wexford are both members of Galway

Triathlon Club. Rose, a former competitive swimmer with her home club; Asgard in Wexford took up running whilst in college in UCD.  When Covid hit she bought a bike and so began her life as a triathlete. Rose joined the Galway club last year taking on her very first triathlon at IRONMAN 70.3 Vietnam.  Winning her age group Rose stamped her ticket to the World Championship and took the qualifying slot available in her age group for the 2022 event.

Natasha Carrick has grown up through triathlon, a member of the Galway TC Junior Club for many years she is no stranger to a podium and was a successful junior athlete. Taking a break from the sport during her college years she has returned to triathlon and to her winning ways in recent times. Winning her age group at IRONMAN 70.3 Marbella in May of this year, she took the only slot in her 18-24 age group for the World Championships. For both Rose and Natasha this was their first time taking on a middle distance triathlon where participants complete a 1.9k swim, 90k cycle and finish with a half marathon. A fantastic achievement for both athletes who at such a young age have a big future in triathlon ahead.

Both athletes have been working hard since qualifying for the World Championships, the training across each discipline as well as strength and conditioning a must for success at the distance.  In addition to their training across swim, bike and run, there is a need to focus on preparing to race in the dry desert heat in St George which is a battle in itself. Swimming 1.9k in the reservoir at Sand Hollow in Utah, the 90k bike course is tough with lots of climbing, the iconic Snow Canyon part of the World Championship bike course. The final leg of the race will see athletes run 21.1km through the hilly streets of St George, before running down the finish line in front of an incredible crowd in the Land of Endurance.

Natasha and Rose will race on the Friday of the two day World Championship event. Speaking about their qualification for the World Championship Natasha said “When racing in Marbella this year, I never thought it would be an option to go to a World Championship, so to win my Age Group and have that decision to make was such a huge deal, but I’m grateful to have been persuaded to grab the opportunity. I’m absolutely buzzing to represent my club and country, so much so we have ordered Irish tri suits. To have the Irish colours on will be surreal. The club has been so helpful in supporting us for Utah, I want to do the club and all my training buddies proud. I want to, as always, get the club name out there and attract more people to join triathlon and our club, especially kids and teenagers. I coach the junior club and I always strive to be the best role model for them. I really want to make them as proud as they always make me.”

Rose said “I feel so very lucky to have all of this support from Galway Triathlon Club,  and very proud to have so many inspiring people in my corner. It means the world to me to be racing among the best in the sport and I appreciate the assistance and guidance from all those who have helped me get to this point. From our trip to Lanzarote in March of this year to the variety of training offered by the club and friends I have made over the past year it has been a fantastic journey to date and I can’t wait to get to Utah,  soak up the atmosphere, race as best as I can on the day and do everyone proud.”

Speaking about the success of Natasha and Rose, Francis Yates, Chairperson of Galway Tri Club said, “we are extremely proud of the girls and their success to date, the club is behind them all the way and we can’t wait to see them race on the world stage amongst the best athletes in the world.  They will of course have the added bonus of having fellow Galway Tri Club member Joanne Murphy there to support them as she spreads her wings and voice to America as a member of the IRONMAN World Championship announcing team.  We wish all three of our club members the very best of luck in Utah”

An online raffle is now live to support the costs of Rose and Natasha in getting to the World Championships.  With a host of prizes to be won, if you would like to support the raffle you can click on the link HERE the draw takes place on October 20th. 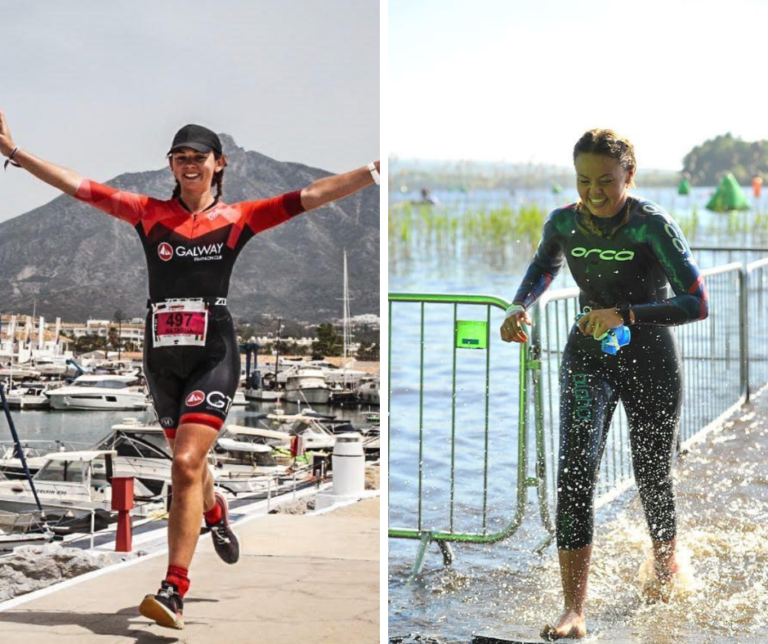