Medal Mania at Dublin 2021 for the European Cross Country Championship

It was a day to remember for the thousands in attendance at the sold-out SPAR European Cross Country Championships at the Sport Ireland Campus in Dublin yesterday, with Ireland claiming 3 medals on a historic occasion for Irish athletics.

Irish athletes rose to the electric home support throughout the day, and the stellar performances just kept on coming, resulting in Ireland finishing 3rd nation overall on the points table behind GB & NI, and France (5th overall on medal table).

Ireland secured the team gold medal in the men’s U23 event, led by Darragh McElhinney who took the silver medal in scintillating style.

The day started with a bang, with Ireland winning team silver in the men’s U20 6000m (1 point off gold) behind GB & NI. Abdel Laadjel was the highest Irish finisher in 6th, with Dean Casey and Nick Griggs backing up in 13th and 16th to complete a brilliant team performance.

Scott Fagan was just outside the top 20, crossing in 21st, while Sean Kay crossed 50th and Cathal O’Reilly 77th to complete a team that will go down in the Irish athletics history books.

The men’s U20 team secured the superb silver medal on a blistering start to the day for team Ireland, which would see Irish athletes take three medals from the first four races.

The U20 women’s team put in another strong performance for team Ireland on the day, with 3 athletes securing top 30 placings to leave Ireland 8th in the final team standings.

Aoife McGreevy (23rd) and Emma McEvoy (24th) led home the Irish charge with both athletes crossing the line in 14.07, just 3 seconds outside the top 20. Jane Buckley followed hot on their heels in 14:15 for 30th place, while Rebecca Rossiter, Laura Mooney, and Rosie Roberts were roared up the home straight by the home fans to all finish under 15 minutes.

Darragh McElhinney had Irish fans finding their voice once again in the men’s U23 race at 10.50am, duelling with Great Britain’s Charlie Hicks as the two settled down to battle it out over the final lap.

McElhinney’s performance, coupled with a 6th place finish for Keelan Kilrehil(24.42) and 13th for Michael Power (25.03), saw Ireland take the team gold medal, with Great Britain and Northern Ireland having to settle for silver, and France the bronze.

Donal Devane secured a top 40 finish (40th) and was followed closely over the line by Jamie Battle (44th), and Thomas Devaney (67th) to complete a remarkable opening 3 races for Ireland.

Sarah Healy was first of the Irish to cross the finishing line in the women’s U23 race, with the Tokyo Olympian coming home 5th in 20.48, behind eventual winner Nadia Battocletti (20.32) of Italy.

Healy was right in contention heading into the final lap, but Battocletti ramped up the pace in the closing stages. Second placed Klara Lukan of Slovenia and Portgual’s Mariana Machado completed the podium.

Danielle Donegan and Aoife O’Cuill worked well together in true cross country spirit, and both crossed cross the line within 3 seconds of each other for 31st and 32nd place respectively. Lauren Tinkler (46th), Jodie McCann (49th), and Ruth Heery (50th) completed the top 50 placing for the U23 team.

Ireland’s mixed relay team of Ciara Mageean, Luke McCann, Síofra Cléirigh Büttner and Andrew Coscoran also produced in front of the home crowd and just missed out on a bronze medal by the narrowest of margins. They team were right in contention throughout and unlucky not to claim bronze in a dramatic finish, crossing 4th in 18.06.

Brian Fay finished 10th (30.45) in one of the grittiest performances of the day, buoyed on by the huge crowds greeting athletes into the home straight. Jakob Ingebrigtsen of Norway backed up favouritism in taking the gold medal (30.15), opening a gap on the second and third place finishers of Aras Kaya (TUR) (30:29) and Jimmy Gressier (30:34) midway through the final lap.

The team medals went the way of France (Gold), Spain (Silver), and Norway (Bronze), with Ireland just missing out on 3rd place by 4 points.

The senior women’s senior race concluded a special day for Irish athletics, and it was fitting that Fionnuala McCormack led the Irish team home in securing yet another top 10 finish (9th) on her 17th European Cross Country outing.

The women’s team would finish in 4th overall, with the medals going the way of GB & NI, Germany, and Sweden.

Karoline Bjerkeli Grovdal completed a double senior success for Norway with victory in the race (26.34), and was followed over the line by Meraf Batha (SWE) in 26:44, and Alina Reh REH (GER) in 26:53. 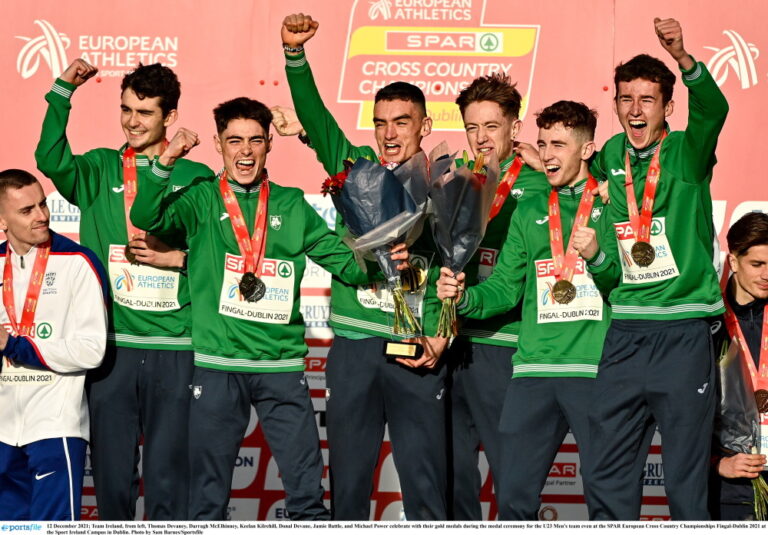