Chloe MacCombe has won a superb silver medal with a standout performance at the Commonwealth Games in Birmingham.

Alongside guide Catherine Sands, MacCombe posted the best result of her still young career at the Games, as the pair came from 3rd to 2nd late in the race.

MacCombe went in to the race with a strong chance of a medal but with less than two years experience of racing at the top level of para triathlon, her performance on the day stands out as a major achievement.

MacCombe emerged from the water in 5th place with 4th and 3rd within range. On the bike, she and Sands set about overhauling their competitors during the technical and initially wet 20km course. A strong 00:32:37 bike split put the pair in third coming in to T2. Up ahead England’s Katie Crowhurst moved from second to first, overtaking Canadian Jessican Tuomela.

As the race entered the closing stages it appeared that MacCombe was headed for third place and what would have been a fantastic bronze medal. However she and Sands never gave up and about 1,500m from the line Tuomela and her guide began to pay the price for the pace they set earlier on as they were forced to slow to an uphill walk. MacCombe and Sands, running the quickest run split of the race had the Canadians in their sights and made the pass not long before they hit the blue carpet.

They crossed the line to record Northern Ireland’s best ever result in triathlon at a Commonwealth Games of silver in a time of 01:14:39.

Speaking after receiving her silver medal, Chloe MacCombe praised her guide and said he hopes her performance will help others to achieve.

“Walking up to the podium it really hit me that we came second in the Commonwealth Games. I couldn’t have done it without Catherine. It was a technical bike but I had full trust in what she said and again in the run when she said we could really push for second. I really hope this inspires other people to try the sport and give it a go.”

A superb day for Northern Ireland and Irish triathlon in general didn’t stop with Chloe’s medal, as sister Judith MacCombe came home with 4th place. Judith, with guide Anne Paul yielded some time on the swim but once on dry land began to move their way through the field and finished in a time of 01:18:30.

Teenager Oliver Gunning had a day to remember too. Following a very competitive swim, he and guide Kyle Duncan unfortunately crashed on the wet and technical bike course. Their pair recovered however and battled on to cross the line in 9th place – a valuable race experience in a top class field. 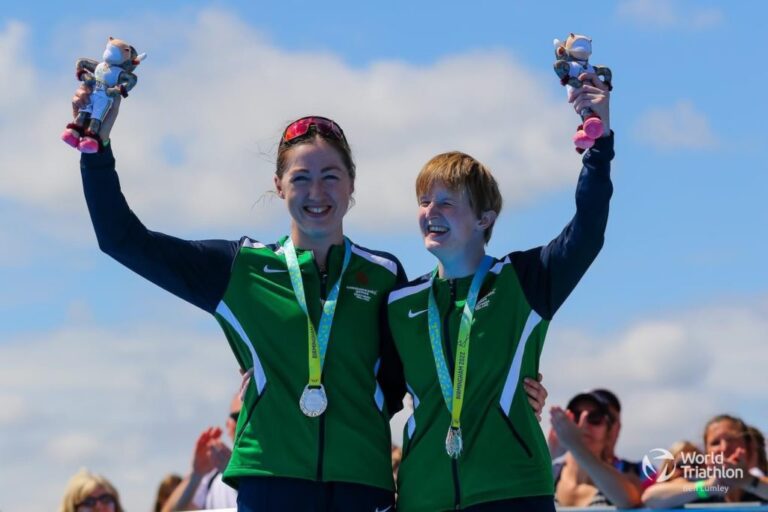