Mageean Named Athlete of the Year

Ciara Mageean (City of Lisburn) was named as the Athlete of the Year at the 123.ie National Athletics Awards which took place in the Crowne Plaza Hotel, Santry today (November 23rd).

Mageean took top honours after her superb season which saw the Portaferry star claim a silver medal at the Commonwealth Games in August, before going on to claim yet another major medal with a superb silver-medal-winning-performance at the European Championships in Munich.

Mageean’s season didn’t stop there, going on produce the best performance of her career to date to break Sonia O’Sullivan’s Irish 1500m record on her way to victory at the Diamond League meeting in Brussels on September 2nd (3:56.63).

Mageean’s time carved more than two seconds off O’Sullivan’s previous record of 3:58.85 set in 1995, and it brought her home ahead of European champion and Olympic silver medallist Laura Muir of Britain.

Rhasidat Adeleke (Tallaght AC) announced herself on the world stage with a blistering run in the final of the women’s 400m at the European Championship in Munich earlier this summer, finishing fifth and setting a new Irish record. The Tallaght AC sprinter received the U23 Athlete of Year Award ahead of the exciting trio of Israel Olatunde (UCD AC), Sarah Healy (UCD AC), and Kate O’Connor (Dundalk St Gerard’s AC).

Reece Ademola (Leevale AC) was named U20 Athlete of Year following his superb 5th place finish in the men’s long jump final at the World U20 Athletics Championships in Columbia on August 2nd. Ademola produced the jump of his life to set a new national U20 long jump record of 7.83m on his way to the 5th place finish, a record he had broken a day earlier (7.76m) on his way to qualifying for the World U20 final.

Catherina McKiernan was a very popular inductee into the Hall of Fame for 2022. The county Cavan native enjoyed her first major cross country success in 1988 when she won the Irish schools cross country title. From there, her career as a cross country runner blossomed, winning silver at the World Cross Country Championships four years in succession from 1992 to 1995. In 1994, McKiernan won gold at the inaugural European Cross Country Championships in Alnwick, England.

She would go on to represent Ireland at the Olympic Games in 1992 and 1996. In 1997, she moved up to the marathon and ran the fastest debut ever by a woman at the time, when she won the Berlin Marathon in a new Irish record of 2.23.44. McKiernan would go on to win the London marathon in 1998, while also bettering her Irish record at the Amsterdam Marathon in a time of 2.22.23 NR which still ranks top of the Irish all-time list.

While the 123.ie National Athletics Awards are a celebration of the many successes of our international and national athletes, it also commemorates the association’s exceptional volunteer base. Pat Kelly (St Abban’s) was named as the Lifetime Achievement Award recipient – the pinnacle volunteer award, while Alister Wilson (Midleton AC) won Outstanding Official of the Year.

Michele Carroll and Carey May were joint recipients of Special Recognition Awards, while Paddy Fay (Raheny Shamrock) received the award for services to coaching.

CEO of Athletics Ireland, Hamish Adams: “The awards not only allow us to celebrate the great performances of our athletes over the course of the year, but it also gives Athletics Ireland the opportunity to formally acknowledge our coaches, officials, and clubs for their enormous contribution to the success of our sport.

We wish all our athletes success at the forthcoming European Cross Country Championships in Italy, and we look forward to building on this year’s successes into 2023 and beyond.”

President of Athletics Ireland, John Cronin, added: “We are very proud of how our athletes have represented us both domestically and internationally over the past 12 months in what has been a year to remember for Irish athletics.

These awards give us the opportunity to acknowledge these performances, but also offer us the chance to thank our coaches, clubs, volunteers, and long serving members of our athletic community who give enormously to our sport each year.” 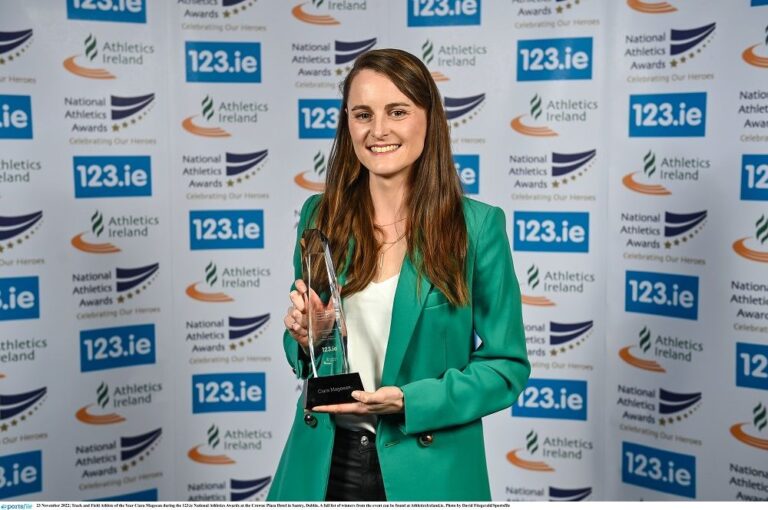