Fionnuala McCormack (Kilcoole AC) took a dominant win in the women’s 5000m in this evening’s session of the Irish Life Health national track and field championships. The Olympian took an early lead in the race, building her advantage with each lap in a masterclass of solo distance running. The Kilcoole star would cross in 16.06 to claim the gold. The battle for silver and bronze medals was a family affair, with the Donore Harrier sisters Sorcha (16.19) and Ide Nic Dhomhnaill (16.20) crossing the line second and third, respectively.

There was action a plenty in the field events Michaela Walsh (Swinford AC) doubling up on her morning success in the shot put to take the women’s hammer title, making it 17 national titles overall. The Mayo woman threw 57.37m to fend off Margaret Hayden (Tallaght AC 54.05) and Casey Mulvey (Inny Valley AC 48.97) who took the silver and bronze medals.

The men’s shot put was hotly anticipated and did not disappoint thanks to a superb throw-off between the in-form pair of John Kelly and Eric Favors. Conditions were never going to allow for anything nearing 20 meters, but that didn’t quell the tight battle for gold. Kelly (Finn Valley AC) continued his superb season, eventually securing the national shot-put title with a championship record throw of 19.25m. The Donegal man took the record from Eric Favors (Raheny Shamrock) who finished his day with a best throw of 18.74m.

Back on the track, Olympian Thomas Barr (Ferrybank AC) secured his place in tomorrow’s 400mH final after a professional performance in the windy conditions to go sub 52 (51.47). Joining Barr in the final at 6:50pm tomorrow will be Clonliffe Harriers pair of Thomas Anthony Pitkin and Niall Carney.

The Men’s 400m final is set to be a star-studded line up with Olympians Christopher O’Donnell (North Sligo AC) and Marcus Lawler (Clonliffe Harriers) both safely progressing from today’s heats. Eanna Madden (Carrick-On-Shannon) will also be one to look out for at the battle for the championship title at 7:35pm tomorrow. O’Donnell will look to continue his super season of performances, with his 48.17 finish in the heats being the fastest of the day.

Ellie Hartnett (UCD AC) and Carla Sweeney (Rathfarnham W.S.A.F. A.C.) will battle it out in the women’s 1500m at 8:10pm tomorrow evening. Both secured their places in the finals with strong first place finishes in their heats, Sweeney crossing the line in her heat in 4:36.36, just a second ahead of Hartnett.

The 800m is set up to be one of the championship’s highlight events with Mark English (Finn Valley AC) and John Fitzsimmons (Kildare AC) both set to compete in the men’s final following today’s heats. English secured a marginally faster time of 1:55.42 with a strong headwind meeting him on the home stretch.

National 800m record holder Louise Shanahan (Leevale AC), fellow Olympian Sarah Healy (UCD AC), Claire Mooney (Naas AC), and Jenna Bromell (Emerald AC) are all set to battle it out for the women’s 800m title at 7pm tomorrow in a race not to be missed.

Luke McCann (UCD AC), Nick Griggs (Mid Ulster AC), Cathal Doyle (Clonliffe Harriers) and Paul Robinson (St. Coca’s A.C.) have all come through their respective heats to make their way to tomorrow’s 1500m final, set to begin at 8:20pm. Each remained calm and composed throughout their heat, focusing on maintaining their position in those all-important automatic qualifying places. Coming through quickest in the heats was McCann with a time of 3:50.77.

Drawing a close on day 1 of these historic championships was the 4x100m relays. In the women’s race, Dundrum South Dublin AC were victorious after an impressive performance from Mollie O’Reilly, Jennifer Hanrahan, Molly Hourihan and Kate Doherty.

The series of heats on day 1 have whetted the appetite for what is to come on day 2, with a host of track and field finals down for decision.

The final day of the 150th Edition of the Irish Life Health Senior Track and Field Championships gets under way from 1pm tomorrow (Sunday 26th June) in Morton Stadium, with live coverage throughout on the Athletics Ireland YouTube channel. Live coverage on RTE 2 will start at 6.05pm. 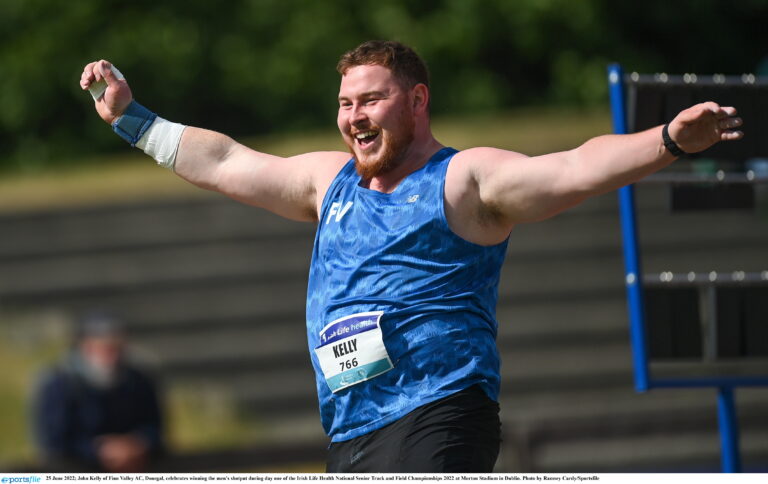