Darragh McElhinney (UCD AC) and Abbie Donnelly (Loughborough) were the star performers at the Autumn Open International Cross-Country Festival in association with Fingal County Council, with both athletes retaining their respective senior titles which they had claimed twelve months previous.

McElhinney stamped his authority on the senior men’s race from the off, setting a strong pace in the leading pack alongside training partner Keelan Kilrehill (Moy Valley AC) who would ultimately finish second to the UCD athlete. Dean Casey of Ennis Track club ran a superb race as he stepped up into the senior ranks, finishing 7 seconds back from Kilrehill in 3rd place.

Attention for McElhinney will now turn to a solid block of training in preparation for nationals in Donegal on November 20th.

Speaking after the race McElhinney said:

“Last year I was very fit very early and I was just trying to maintain it, but this year I’m playing catch up a little bit because the race in Munich meant my track season went on quite long. I came home and took a bit of a break (after Munich) and I’m only really building back up so the next few weeks will be pretty important especially leading into nationals”.

The men’s junior race was another with plenty of quality sprinkled throughout the field. Ultimately it was Sean McGinley of Finn Valley AC who claim the win with an impressive kick on the final lap. The Donegal athlete will now focus attentions to preparations for a tilt at the national junior cross country title where he will undoubtedly enjoy plenty of home support.

Niall Murphy crossed in second to lead home a strong Ennis Track contingent, while Cathal O’Reilly of Kilkenny City Harriers secured third place and looks one to keep a close eye on over the cross country season.

The senior women’s title will once again head to Loughborough following another dominant display from Abbie Donnelly and her teammates Grace Carson and Alex Millard who finished in second and third respectively. Donnelly and Carson led as a pair for much of the race before a final lap flourish saw the 2021 champion storm up the home straight to claim back-to-back titles.

Speaking after the race Donnelly said: “It was tough, harder than I remember but it was great to see such a great turnout and to be in such good company out there. I’ve a 10k coming up soon and then the big one for me will be the European trails in the hope of making my national team”.

Avril Millerick (Youghal AC) claimed the women’s junior title with a controlled race, noting in her post race interview that “it feel’s great to know where I am training wise – I was expecting to maybe claim a top 5 because there was so many strong athletes entered so I’m delighted”.

Loughborough claimed yet another podium with Jess Norket finishing second behind Millerick, while Nicole Dinan of Leevale was third.

There was no shortage of action and drama in the master’s races throughout the day. Leevale athletes were to the fore across all categories, highlighted by members Sinead O’Connor and John Shine taking home the Jim McNamara Perpetual Trophy on the day.

Over 140 relay teams battled it out for national honours in the new edition of the Inter-Club Cross Country Championships which proceeded the Autumn Open International this afternoon (Oct 16th).

More important than the titles on offer, the event provided athletes with the perfect opportunity to whet their appetite for cross country running. The event proved a huge success with a host of superb team performances across the hour of non-stop action. Finn Valley claimed the first relay title of the day in the U11 girls race, shortly followed by Moyvalley AC who took the U11 boys title.

Cork athletes dominated the U13 girls race, with the Midleton AC relay team impressive winners ahead of North Cork AC and Leevale AC.  The U13 boys race was won by a strong St Cronans who stoped Midleton AC from claiming what would have been an impressive U13 relay double.

Rounding out the relay action was the U15 category which saw Leevale AC claim the honours in the girls race.

Final results will be published in the coming days. 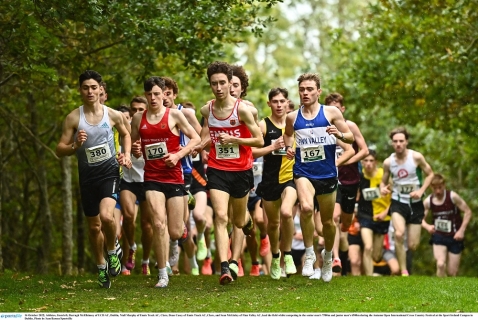