We had hilly in scenic locations like Waterville, Kenmare, and Downings. We had flat and fast for National Champs in Tyrone and Rosslare. We had epic swims in places like Kilkee, Ballyhass, Cobh, Valentia, The Liffey, Castlewellan, and Hazelwood to name just a few. There were first-time winners shooting their shot and Olympians taking home national titles. But most of all there was craic, friendship, camaraderie, and achievement, and through it all, a love for triathlon shone bright. This was the 2022 Triathlon National Series.

Always a consistent performer, Donncha Kiely is no stranger to the Triathlon National Series, last winning in 2018. Kiely’s series started later than most, with a win at his club race in Kinsale – the ever popular King of the Hill (KOTH). A high points total of 506.190 demonstrates the strength of his performances, Donncha won all of his points races, the aforementioned KOTH, Cobh Jailbreak, Hardman Valentia and South Coast TC’s Moby Dick Triathlon.

A solid third place result at the challenging Lost Sheep middle distance wasn’t needed in the end to add to the points tally. Donncha Kiely is the winner of the 2022 Triathlon National Series.

The men’s Triathlon National Series was a close fought affair right up to the final weekend of the series, where Donncha Kiely’s win in Valentia put him just under two points ahead of second place Niall Cornyn.

Cornyn’s work through the winter of 2021/22 was evident from his form at season opener in Tri Tyrone, an outstanding performance in a deep field. Cornyn battled hard with the other front runners on the bike to pull ahead inside the final quarter, ensuring he was in the lead heading onto the run. We have all seen what Cornyn is capable of on the run, and he finished in a new course record of  3.58.29 to defend his 2021 title!

McManus’ top points came from his third spot at Top of the Mourne triathlon at the end of July. Fourth in a massive field at the Triathlon National Series in DCT and a third at TriAthy also added to the tally, with his overall third at Two Provinces completing his season’s total of 494.137.

Completing his series total with a month to go, Daniel’s last race of the season came with a win at Mourne Triathlon. His strong results throughout the season meant that points from Mourne, Crooked Lake and Base2Race Harbourman were discounted. Congratulations Daniel McManus, third in the 2022 Triathlon National Series. 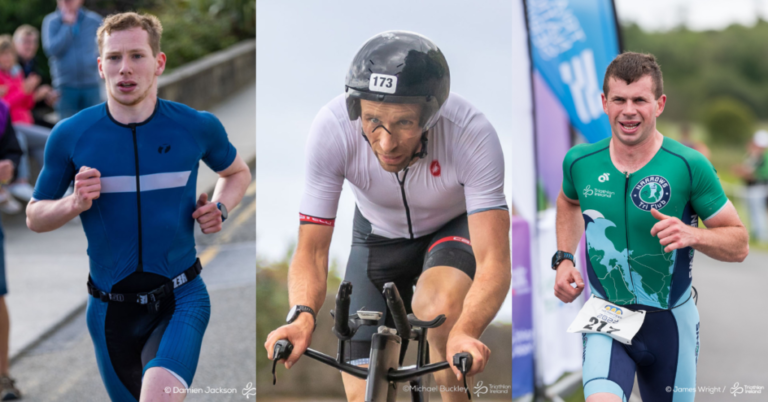