Race Report: A Decade of Dreaming Realised On The Big Island by Marc O’Dwyer

Race report written by Marc O’ Dwyer from Big Red Cloud, who for 10 long years just like thousands of other triathletes, has dreamt of reaching and racing at the holy grail that is the IRONMAN World Championship in Kona, Hawaii.

I started doing IRONMAN after encouragement from my brother who lives in California (easy for him to say with the nice weather they have!), I had started triathlons in 2002 when I entered a relay team in the Brittas Bay sporting proud charity triathlon and ended up being beaten into second place by no other than Eamonn Coughlan the Irish Olympian! That really whetted my appetite for triathlon and so started my journey. I couldn’t really swim before I began tri, only managing to swim four lengths of a seventeen metre pool, I was also a very nervous swimmer especially in the sea. I managed to improve over the years on my running and biking but never managed to really get over my fear of swimming. I was reasonably successful and managed to qualify for age group level for Ireland at two World Championships and two European Championships.

My first IRONMAN was in 2012 in Klagenfurt Austria, much to my dismay it ended up being a non-wetsuit swim in a lake! I nearly didn’t start I was so stressed, but thankfully I did, I then went on and completed; Austria 2013, Frankfurt 2014, Nice 2015, Mallorca 2016, Copenhagen 2017, had to pull out of Barcelona 2018 as I had got shingles, then Frankfurt again 2019, had a DNF there as it was 40 degrees and I think I still had the shingles hanging around.

Then Covid hit and as we know races were cancelled around the globe, finally I entered Copenhagen 2022 and had said it was going to be my last race, but then I managed to qualify for Kona. I should point out that in two of the aforementioned races I had two panic attacks in the water and thought I wasn’t even going to get through the swim! Luckily I managed to pull myself together and get them done! It’s really not a nice feeling totally irrational these voices in your head as you can’t stop your chest from racing and you can’t get enough breath in, but you have to calm yourself down and try make sense of it, which is what I luckily managed to do.

So on to Kona, with only six weeks to train, I had already organised a holiday in Mallorca with my wife two days after Copenhagen. I didn’t want to disappoint her or ruin the holiday by training all the time, so I took two weeks R & R just hiking every day with her and then doing a run or a swim for an hour each day. So with three weeks to train when I came back, I put a plan in place with my coach Chris Simpson from Beacon Sports Lab, which included turning up the Dyson to 34 degrees while doing three hour indoor turbos or jumping in the sauna or steam room after every run or swim.

I broke my journey up to Kona by stopping off to stay with my brother Paul in San Jose California, I arrived in Kona six days before my race on the Saturday, just enough time to acclimatise and get over jet lag, in hindsight a few more days would have been beneficial.

The Big Build Up

Immediately after I arrived you could feel the build-up of excitement, the finish line was being assembled along with transition and the athlete village. I had no expectations but had decided to embrace every single aspect of the experience. Two of my four daughters were able to make it to Kona, but unfortunately the other two and my wife were not in a position to be able to come. The Parade of Nations was on Monday and it was so exciting to see so many Irish competitors there along with their families. Owen Matin through velo revolution had organised T-shirts for us and it was an extremely proud moment for us all to be representing our country at the biggest event in the triathlon calendar. Next was the infamous underpants run, wow I have never seen so many of the fittest people in the world in their jocks! It was a sight to behold! And so the week went on with events, sightseeing, meals, fun and laughter.

The Day I Had Dreamed Of

Early start up at 5am to have a shower grab breakfast and get down for body marking, drop nutrition and hydration on to the bike, get the wheels pumped and do a last check that the bike was ok. I went back to my room which was right beside the start to calm myself down. My wave 55-59 was second last to start at 7.35am with the professionals starting at 6.25am. Being a non-wetsuit swim in the Pacific Ocean you can only imagine what a state I was in, I was so so nervous about what lay ahead of me, but kept telling myself this is my dream, this is what you have waited 10 years for.  So I built myself up and headed down to the start. The atmosphere was palpable, my brother, along with my niece had also arrived to support me and he told me to look out for his friend Dave and explained the tri shorts he was wearing.

I entered the water not looking forward to treading water for up to 8 minutes before the start, so I left my entry until the last minute. The water had some big swells and at times you couldn’t sight properly, but it was crystal clear a lovely temperature and I kept over to the left and out of trouble for fear of getting hit, kicked, or submerged. At the halfway mark believe it or not I saw my brothers friend Dave’s shorts swim by me and started tapping him on the leg, he got a bit annoyed and stopped to look at me, I explained who I was and we ended up hi fiving each other, I mean what are the chances! The swim was tough on the way back as we were against the current, but it went perfectly, and I was so thrilled to be out and safe.

I knew the bike course potentially was going to be windy, but I had heard before the start of the race that the wind on the day wasn’t bad at all, well that’s if you were out early on the bike course. As we were the second last start wave and my swim time was slow, the wind had picked up significantly and I found myself battling headwinds for 95km uphill all the way to Hawi.

My bike splits were way down on what I would expect of myself normally, but I had started this race with the intention of finishing and not trying to get a PB. So I calmed myself in that knowledge and kept telling myself “this is your dream” and just really enjoyed the cycle as if it was a Sunday spin with my friends. The heat was intense, something like 34 degrees and 80% humidity. Not only was the sun hitting you with all it could give from above but the black lava based tarmac was pushing back up just as much heat. The wind was relentless and caught me several times from the side.

The return from Hawi was definitely faster with the wind behind us at stages, however that threw up other challenges as you got so much hotter with no wind in your face.  I lost two water bottles on bumps from my back holder which I had been using to pour over my head, so that didn’t help. I stuck to my nutrition plan eating 226ers and some bananas from the aid stations, precision nutrition and dioralyte and drinking water like a fish.

The Run – Walk and Run to Get It Done

Once I was off the bike I knew I was going to finish as worst case scenario I had enough time to walk the marathon if needed. My plan was to run for as long as I could except for hills and aid stations. I started off strong and kept to the plan for the first 10km but then the heat got to me, so I revised my plan and walked for 30 seconds and ran for a minute, counting all the way for the rest of the run. It seemed like an age before I got to the energy lab, the run along the Queen K is hot, rolling and monotonous.

I thought I was never going to get to the energy lab, at the late stage I was at, the support on the run was minimal, so you only had yourself to motivate you to keep moving forward. It had gotten dark and although the sun was gone in, the heat off the road was still intense, the energy lab is particularly hot but once you are out of it, the run back to town is slightly downhill.

The mile markers were lit up and apart from that all you could see in the darkness were these zombie like creatures plodding along with illuminous necklaces on them which had been handed out by the organisers so people could be spotted. My brother and niece met me at mile 25 to give me some encouragement, but as I had been doing a walk run strategy I was actually in very good shape and they couldn’t keep up with me.

You Are An IRONMAN

The last couple of hundred yards up Al’ii drive are absolutely magical, thankfully there were still supporters out cheering everyone home. I was handed a rose by some random woman and then the noise started getting intense as I got closer to the finish gantry. Hearing Joanne Murphy calling my name and then in unison with the voice of IRONMAN Mike Reilly telling me Marc O’Dwyer YOU ARE AN IRONMAN was a memory that will live with me forever. The final icing on the cake for me was being greeted and presented with my lay at the finish line by my two daughters Alexandra and Georgia along with my brother Paul and niece Kate. It was so emotional and an ideal way to put an end to the full IRONMAN chapter in my life. Thank you IRONMAN for an amazing ten years.

Of course none of this would have been possible without the support of my amazing family. My wife Ann and daughters Amy, Alexandra, Zoe and Georgia. They have been a huge support to me over the years with their encouragement, patience, support and love. I am so lucky to have been blessed with these ladies in my life. 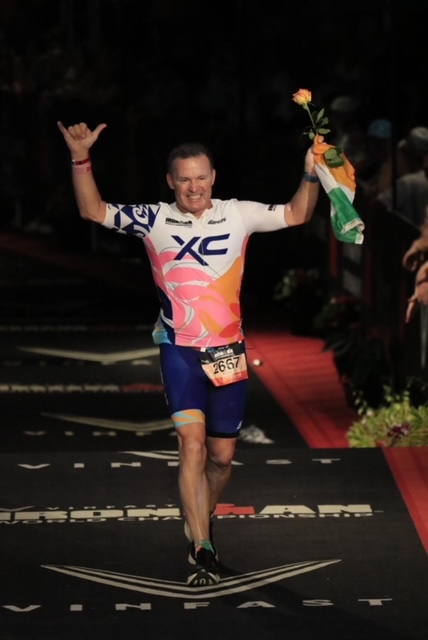