The term legend often describes someone renowned for past glories, only Robin Seymour keeps on winning.

Now 51, when many have swapped the saddle for the sofa, he’s been as successful as ever as he competes as a Masters rider. He was crowned Over 45’s (M45) World Champion in Mountain Biking three years in a row from 2016 to 2018 and earlier this month became M50 Cyclo-cross European Champion.

After taking home the iconic jersey in Namur, Belgium, Seymour explained to Cycling Ireland why he’s as motivated as ever to compete.

“Namur is an iconic Cyclo-cross venue, being in Belgium for one, but it’s fairly extreme in Cyclocross terms even though it hasn’t been on the calendar all that long it’s one to do. It was an amazing spectacle for the sport.

“It’s a special event to do. Should you still be racing at this age? Should you still be motivated by doing this? It’s funny a lot of the professional riders or riders who had successful careers like medalists at elite level probably don’t. They’ve probably got it out of their system and go off and do something else.

“I’ve been racing a long time, and my friend Adrian (Lansley) would have been too. I think the riders who are always still chasing something if you hadn’t been one of the most successful riders. As an elite rider a fair chunk off (the best riders). I certainly wouldn’t have been entertaining thoughts of winning medals at international level.

“Masters gives you the opportunity to stand on the podium at a major international event. It’s maybe vain I guess to still be chasing that but it’s what makes you get up in the morning. I love the competition and racing domestically here too – although it’s quite difficult to do it every weekend – you’re still inspired by pushing hard and chasing the rider in front of you. The feeling of racing with somebody on the last lap, there’s nothing like it. There’s nothing that can replace it.”

World and European glory is certainly a slightly different feeling to winning elite national championships or representing Ireland in the Olympics. He said:

“At the European Championships on a Friday, you’re not riding in front of the crowd that there are on Sunday, but it’s still a good feeling and a great event. I think to be able to stand on a podium at the end of it all is an amazing feeling. I think people here see it, are interested and inspired by it.”

Cyclo-cross in particular has come a long way in Ireland since his first National Title in 1991 and is something Seymour finds ‘heartening’. He added:

“In Cyclo-cross, the standard certainly has risen. Even in the near past, maybe ten or twelve years ago, when I would have been competing as an elite there were some great battles between myself and Roger Aiken but now there’s a lot more riders in the mix.

“I went up to Dungannon at the start of the season (Ulster Cyclo-cross Series) and just the amount of riders under the age of 21-years old at it sitting in the top ten, it’s really heartening to see. They were all at a high standard and all pushing themselves and it’s a sport now that’s attractive.

“It’s a crossover from the road and at a different time of the season too. There’s a lot of guys who will ride the road during the summer and then come back to cyclo-cross (in winter). It’s captured the imagination of the younger riders, it’s really good to see and it’s in a much healthier place than it’s ever been.”

The discipline’s growth on these shores can perhaps be underlined by the upcoming Cyclo-cross World Cup stage in Dublin on December 11th – the first time the event has ever come to Ireland.

And Seymour has urged fans to take advantage of the opportunity to witness the world’s best compete as he looks forward to a big day of racing – albeit from the sidelines this time around. He said:

“I think it’s a wonderful opportunity for people to get out and look at it and see what it’s like. Like an elite sport of any kind, it’s competed at a really high level, but Cyclo-cross is incredible even by those standards. The guys at the front of the sport are the most incredible all-round athletes – their dexterity on and off the bike, their skill level and of course their fitness and power.

“It’s a sight to behold, it looks surreal when you’re looking at them and the speed that they’re riding at. It’s fascinating to watch. It’s a great opportunity for people to see it because unless you actually witness it it’s very hard to (comprehend it). If you stand on the sidelines, I think you will be dragged along by it and have a good interest in it.”

“People were encouraging me to ride it. For one I’d lose my Masters status if I rode the World Cup but as well as that I’d be on a highway to nothing cycling around on my own in the back!” 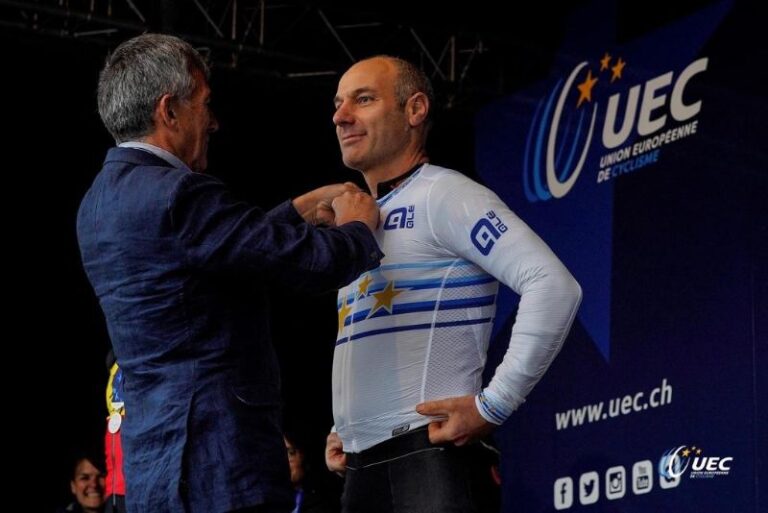