A new world record has been set for the fastest crossing of the Atlantic by a team of five rowers from Ireland. Rowing from the Canaries to Antigua, in 33 days, 12 hours, and 38 minutes, the team finished 5th overall and were the first team of five to row across the Atlantic in the 2022 event.

Brothers Gearoid and Diarmuid Ó Briain, alongside Shane Culleton, Tom Nolan, and Derek McMullen, crossed the finish line of the “The Talisker Whisky Atlantic Rowing Challenge” at approximately 12:30 AM Irish time this morning.

Rowing under a team name, ‘Row Hard or Go Home 5’, they set off from La Gomera in the Canary Islands on the 12th of December 2022,  with a target of setting a new world record. Not only did they break it, they smashed the previous record set by ‘The Ocean 5’ team of 35 days, 19 hours, and 50 minutes in January 2020.

For a team that had little to no rowing experience, this was an incredible achievement. The five have been on a training plan from John Belton for the past two years, allowing them to take on the top teams in the event, many of whom had experienced and indeed professional rowers.

The biggest challenge to the Row Hard or Go Home Team was not their lack of experience, but a failed solar panel. The main panel which gathers the majority of energy for the boat, which provides heat, energy, and generates water failed, causing the team to lose communication, navigation, and steering. However, team member Derek McMullen, whose day job involves servicing CT scanners and MRI machine, was able to rewire the boat while three members of the team continued to row the boat.

The Row Hard or Go Home Home 5 Team, partnered with Row Hard or Go Home 4 who are currently enroute to the finish line, aiming to raise €30,000 for the RNLI and Laura Lynn Children’s Hospice.  Not only have they smashed the rowing record they have smashed their fund-raising target too with  almost €50,000 raised for the for their chosen charities.

You can find their donation link HERE. 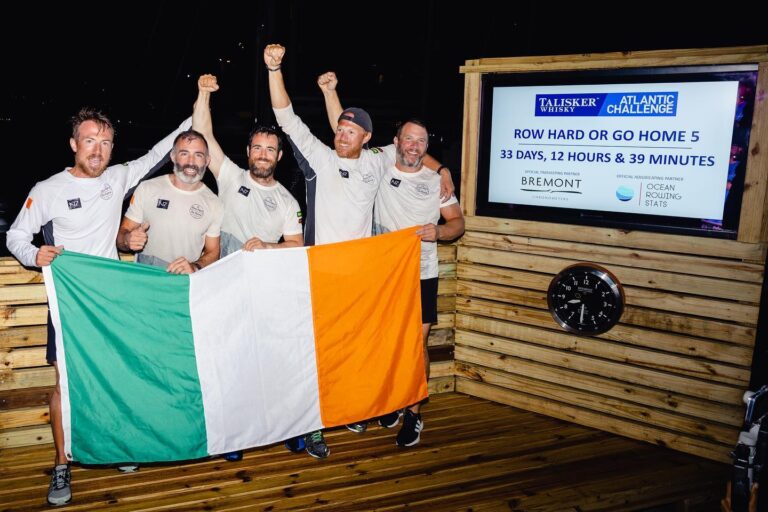