A first-of-its-kind community integration initiative is being launched as a joint venture between Swim Ireland and Sanctuary Runners.

‘Sanctuary Swimmers’ will use the experience of open sea swimming to bring together all in the community – including asylum seekers and refugees currently living in Direct Provision.

Yesterday’s launch follows the completion of a pilot programme held in Cork in the autumn of 2022 when 18 people, from across 13 different countries, were taught how to swim by Swim Ireland instructor Deirdre Sheehan.

Building on from the success of Sanctuary Runners, founded in Cork in 2018 to break down social barriers which exist between migrants and locals across Ireland, the Sanctuary Swimmers initiative will now expand to include six locations in 2023.

Groups will consist of around 18 people and be made up of locals and people who have moved to the area alike – and Swim Ireland instructors, with a specifically designed programme, will teach the participants how to swim and be at ease in the open sea.

Releasing two short films documenting the journey through the recent pilot programme, filmed by documentary maker Clem McInerney, the films conclude with a message of congratulations from Refugee Olympian and UNHCR Goodwill Ambassador Yusra Mardini, whose story is told in ‘The Swimmers’ film on Netflix. Mardini promises to “One day come swim with you in Ireland.”

Swim Ireland CEO Sarah Keane explained the importance of the Sanctuary Swimmers initiative. She said: “The open water can, for some, invoke a feeling or fear, for others a sense of adventure. Those emotions are heightened for those who have never been in the sea before. Transcending these is the power of the Sanctuary Swimmers’ initiative and doing it all alongside people we care about and who support us is what makes it truly unique.”

Celebrating the 5th year of the Sanctuary Runners’ movement which now has over 10,000 members across Ireland its founder and CEO Graham Clifford said this collaboration with Swim Ireland offers another vital strand for community integration.

“We live on an island, open sea swimming is a liberating gift we can all enjoy. And even for those who may have developed negative views of the open sea because of their journey to Ireland, conquering those alongside locals is so important. As with our core work with the Sanctuary Runners we believe sport has such a vital role to play in community integration, in bringing people together no matter their nationality or legal status and helping natural positive friendships develop while always championing solidarity and respect to all.”

Video – Part One – The Sanctuary Swimmers 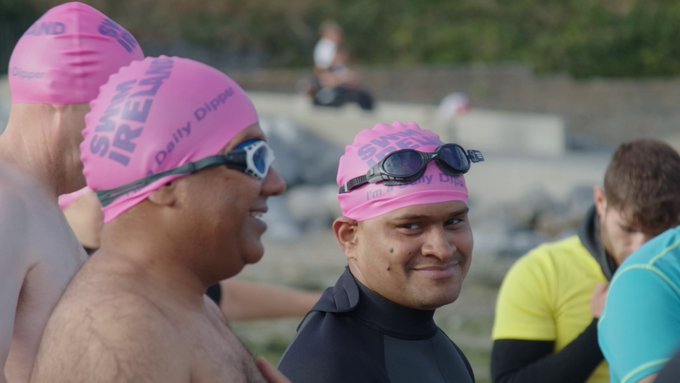