Scaling The Height of Everest On Mountain Bikes

A group of Mayo mountain bike enthusiasts are taking on the ‘Everesting Challenge’ – ascending and descending a total of 8,848 metres, the elevation of Mount Everest, to raise much-needed funds for Croí and Mayo Mental Health Services.

The off-road cycle challenge, taking place on June 19th, on the iconic pilgrimage trail of the Western Way, located on the Westport side of Croagh Patrick will see the riders ascend & descend the mountain trail known locally as Skelp over 110 times to achieve the 8,848m.

The trail being used is 700m long with 88m of elevation per ascent, making this challenge intensely physical, whilst also testing the groups mental capabilities and technical endurance.
The mountain bikers are amongst the first in Ireland to take on an off-road Everesting challenge, also aiming to claim three extra achievements across the following classifications

Soil – requiring you to get dirty whilst climbing

Short – you have to go steep

Significant – a climb that is iconic.

Road cycling has seen many athletes conquer an Everesting quest, Irish rider Ronan McLaughlin holds the current Everesting world record for road cycling for the fastest ascent on a bicycle up the virtual height of Mount Everest. The Donegal man completed the 8,848 metres, in a time of 6:40.54.

The Mayo mountain bike group, led by Padraig Marrey from Ballinrobe, are trying to promote off-road cycling and bring it to the masses. Speaking about the challenge Padraig said “If we can get kids off-roading from an early age it will make them better bike handlers. It’s so much fun and a great way to keep kids involved in cycling,”

Rachel Nolan (Ballina)
No stranger to ultra-endurance events whether cycling, running or adventure racing.. She is literally
‘Queen of Endurance’. In 2020, she was the fastest overall participant to complete The Trans-Atlantic Way cycling race.

Colin Loughney (Hollymount)
Rally driver to racing bikes, Colin is new to endurance events but in 2020 he was one of the 13 who completed the virtual Everesting challenge on Zwift. A demon descender he will be flying down the mountain.

Trevor Costello (Islandeady)
Gravel, Road or MTB Trevor is quite comfortable on any bike and on any terrain, probably the best suited to this event weighing only 50 odd kgs. He is hoping there is no wind or he will get blown off the mountain.

Bryan Hyland (Westport)
Another newbie to Endurance cycling and definitely new to MTB, he was also part of the 13 who completed the Virtual Everesting in 2020. It won’t be for the wanting of effort that will hold him back in his plans to complete this challenge.

Padraig Marrey (Ballinrobe)
Probably the most experienced of all the crew, he has taken part in many challenges over the years including the completion of an ‘Everesting’ on foot in 2011 as part of a group of 11 participants who climbed Croagh Patrick non-stop12 times in under 24hrs.

The riders have a significant mountain to climb to achieve success with their challenge all whilst racing funds for Croí and Mayo Mental Health Services. Suport their efforts and put power in their pedals by donating on the link HERE. 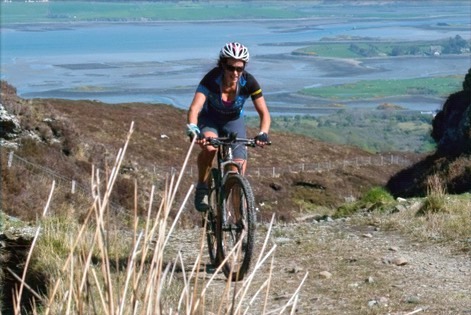