Ronan Grimes rode an impressive heat in the individual pursuit in the afternoon against World Record holder, Jozef Metelka of Slovakia. His time of 4:42.111 over the 4000 metres was enough to see him progress to the gold medal ride off against the Slovakian rider, who qualified fastest.

The Athenry man left it all out on the track against Metelka performing a better ride than his qualifying one despite posting a longer time. Grimes covered the 4000 metres in 4:45.129 and managed to hold off the Slovakian rider from catching him, the first time Metelka has not been able to catch and overtake any of his opponents.

The full report from day one can be found at: https://tritalkingsport.com/grimes-clinches-silver-at-paracycling-track-world-championships/

Burns, Timothy and Grimes give it their all on the second day of the Paracycling Track World Championships

Commenting after the race, Timothy said, “It was an easy enough race. I suppose I was on the front for a good bit and probably looking back now I should’ve gone. I might’ve had a better chance, but I think I thought there was longer left then there actually was so it’s probably my own fault really.”

Speaking about her performance so far in competition, Timothy added, “I think I’ve done better than what I had expected I suppose time wise and then the scratch race I had obviously hoped to medal in that, and I came as close as I could have.

“It’s been really good, it’s good to get the chance to race. I like the velodrome here so hopefully tomorrow will go well.”

Chris Burns finished in fifth place in the 1km Time Trial matching his qualifying performance where he posted the fifth fastest time while knocking two seconds off the national record earlier today (1:14.383). Burns covered the 1000m distance in the final in a time of 1:15.122 which was enough to see him finish in fifth position.

Burns has shown great consistency so far in the competition and is in a good position for the overall Omnium which ranks riders based on four events: flying 200m, individual pursuit, time trial and scratch race.

Burns was pleased with his performance today, saying “It was a very positive and consistent performance. I’m just going out to be consistent and hopefully improve that a little bit but we got the consistency and we’re still in the shout for the omnium so it’s all still to play for.

“Yesterday’s events gave me good confidence going into today. I was really surprised I beat my own Irish record by two seconds, it was a big chunk to take off that so I’m over the moon with that.”

Ronan Grimes put in a courageous effort in the MC4 scratch race, lighting up the race with multiple attacks only to be caught within the final two laps.

Right from the start gun, Grimes attacked in an attempt to lap the field. He was joined by Devon Briggs of New Zealand and came agonisingly close to reaching the back of the bunch but as the pace picked up, the bunch began to close the gap on Grimes and Briggs and they were eventually reeled back in with 35 laps to go.

After spending some time in the bunch to recover after his effort, Grimes kept the race alive with a few short attacks only to launch a solo effort with 17 laps to go only to be caught by the bunch with two laps to go, ultimately finishing in 8th position.

Earlier in the day, the tandem pairings of Martin Gordon and Eoin Mullen, and Damien Vereker and Marcin Mizgajski, competed in the MB 1km Time Trial.

Gordon and Mullen narrowly missed out on a spot in the final after recording the 7th quickest time, with the top six progressing to the final. Their time of 1:03.239 is a solid performance for their first time competing together and can now focus their attention on the sprint event on Sunday.

Vereker and Mizgajski also missed out on a position in the final with their time of 1:06.717and will now turn their attention to their main event, the individual pursuit tomorrow.

Ronan Grimes ends his Paracycling Track World Championship campaign with a new national record in the 1km time trial, smashing the record he set at the Paralympic Games. Chris Burns knocked a whole eight seconds off his PB as competition concluded for Richael Timothy and tamdem duo Damien Vereker and Marcin Mizgajski.

In his final event of the championships, Ronan Grimes stormed to a fifth-place finish in the final of the MC4 1km time trial this evening. Grimes who won silver in the individual pursuit on Thursday, set the fifth quickest time in qualifying earlier today producing an impressive time of 1:09.252 just two tenths of a second off the national record.

In the final Grimes went even quicker setting a new national record, breaking his record by nearly half a second and for the first time dipping below 1:09. His time of 1:08.666 was enough to secure him with fifth place in the event, putting him in fourth place in the omnium after four events, just two points behind the bronze medallist.

Speaking after the event Grimes said, “It’s taken me years to get to this 1:08 level today, I’m delighted to finish on a high.

“I’m delighted to have gotten the medal in the pursuit. I think maybe if I had raced a conservative scratch race, I might’ve come away with a result in the omnium but I’m actually happy to have gone out to try win that race”

Chris Burns smashed his PB in the MC2 3km individual pursuit by a massive eight seconds earlier today. The Banbridge native has been on flying form this week, producing PB’s in each of his events.

Burns covered the 3000 metres in 3:50.661, going a whole eight seconds quicker than his previous best time. He finished in 9th place and still maintains a top five position in the omnium which ranks riders based on four events: flying 200, individual pursuit, 500m/kilo time trial and scratch race. With one event remaining – the scratch race tomorrow, Burns is tied in fifth place in the omnium.

Richael Timothy concluded her Paracycling Track World Championship campaign this morning finishing in 6th place in the WC3 individual pursuit covering the 3000m distance in a time of 4:15.816.

Timothy comes away with two national records in the flying 200m and 500m time trial events and two fourth place finishes in the scratch race and omnium.

“I think it went well overall, I obviously got two fourth places so it’s a little bit hard to take I suppose, but at the same time I have progressed since last year or the year before so I’m happy enough with that.

“It’s really good to get to be here before (the Paralympics) but as well for me and the athletes that were beating me by a lot just to get closer, I’m working towards and hopefully next year I can get closer again.” Timothy said.

Damien Vereker and Marcin Mizgajski set a new competition PB in the tandem individual pursuit to finish in eighth place earlier today. Their time of 4:21.153 was a new PB for them, improving massively on the time they set the last occasion they competed together at the Paracycling Track World Championships in 2020.

The pair had a mechanical as they came out of the start gate which meant they could restart their effort. The second time around the pair got off to a flying start and achieved their goal of setting a new PB.

Vereker was delighted to be back competing on the track.“There’s a great atmosphere at the track, I love just the feeling of the intensity of the track when you’re on the boards, feeling the speed. Myself and Marcin have developed a kind of non-verbal communication through the pedals so it’s just great you know when to push together and everything, so yah it was really good” Vereker said.

Ireland concluded their Paracycling Track World Championships on Sunday as Martin Gordon and his pilot Eoin Mullen battled to a 5th place finish in the tandem sprint while Chris Burns capped off an impressive week of racing finishing 9th in the scratch race and 6th overall in the omnium.

Martin Gordon and Eoin Mullen were first up in the tandem sprint qualifying and set a time of 10.212, qualifying 5th fastest for the quarter finals. The new pairing came close to breaking the national record in the flying 200 which was previously set in 2019 by Gordon and his pilot at the time, Eamon Byrne.

In the quarter finals, Gordon and Mullen faced off against a strong French pairing who got the upper hand winning both heats and progressing to the semi-finals. The pair ultimately finished in 5th place after beating Japan in the 5th-6th final in a one-off match sprint.

This was Gordon and Mullen’s first time competing together and have learned a lot this week that they can build on for future competitions.

Speaking after the competition, Mullen said: “Well, the (flying) 200 went alright. We would’ve liked to have done a bit better but for the first time riding the (flying) 200 together in a race, 10.2 isn’t so bad.”

“It was .1 of a second off the national record so I think for the first (flying) 200 that is an incredible platform to build off”, Gordon added, “Overall, it’s been successful for us. We would’ve liked more this morning in the qualifier and a bit more in the kilo (1km time trial) on Friday and I think it’s just taking that hunger away with us for more.”

Chris Burns finished in 6th place overall in the MC4 omnium after finishing in 9th place in the scratch race. Burns came into the final day of competition sitting in joint fourth place in the four-event omnium on 94 points, after producing solid performances in the first three events – flying 200 (3rd), 1km time trial (4th) and 3km individual pursuit (9th).

During the 60-lap scratch race, Burns hit the deck after touching wheels with another rider. Burns was quick to remount his bike without assistance and was able to re-join the group he was in before his crash, ultimately finishing in 9th place.

Commenting on the scratch race, Burns said, “It was touch and go at stages in the scratch race. It started off well. I came down in a crash and maybe I should’ve composed myself a bit more and waited for the five laps and then went back up, but I jumped back up. It wasn’t the result I was hoping for but it’s still a top 10 in the scratch race, I can’t really complain.”

In his most successful competition to date, Burns comes away from the Paracycling Track World Championships with personal bests in each of the timed events and two national records in the flying 200 and 1km time trial.

Sunday’s action is Ireland’s last at this year’s Paracycling Track World Championships after four days of competition at the Saint-Quentine-en-Yvelines velodrome. 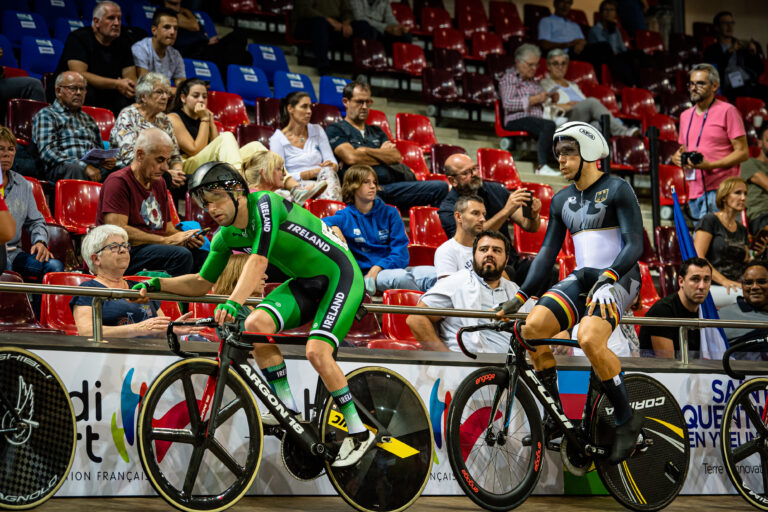