Vincent Luis, Kristen Blummenfelt, Tyler Mislawchuck, Mario Mola, Alex Yee, Morgan Pearson. The list of podium contenders is a long one for the Men’s Olympic Triathlon. It was hard to identify who could take home the title of Olympic Champion just by looking at the start list. Depending on how the race played out, it could go to several different athletes. It was a stacked field, and it was still missing some of the biggest names in the sport. Jelle Geens tested positive for COVID in the lead up to the event, although having since produced sufficient negative results will be allowed to join the Belgian Mixed Relay team later in the week. Richard Murray has also been removed from the start line due to health reasons, having been diagnosed earlier this year with the heart condition atrial-fibrillation; however he will also race the Mixed Relay with his South African teammates.

At 6:30AM it’s already 26˚ Celsius and 67% humidity at Odaiba Bay, with a strong likelihood of hitting 30˚ before the race is out. Ireland’s Russell White, number 17 for the event, dives in from the 43rd spot on the pontoon; with the line-up placing most of the stronger swimmers at differing ends of the pontoon. However, adding to the excitement of the day, the first false start in Olympic Triathlon history took place when almost a third of the athletes were unable to enter the water due to a boat, reportedly carrying media equipment, remaining in their direct line of action. It took almost 15 seconds before the buzzer sounded a second time to indicate the false start, with a number of swimmers unable to hear it and the leading swimmers having swum over 100 meters before Olympic staff boats were able to successfully relay the message for them to return to the dock.

Diego Gomez took the lead in the earlier stages of the opening lap of the swim when the race finally got underway, but Vincent Luis dominated the swim overall; exiting the water first on the initial 950m lap, followed closely by Schoeman, Polyansky, Moya, and New Zealand’s Taylor Reid. Luis lead again coming out of the water, with Polyansky, Schomburg, Reid and Schoeman all hot on his heels into T1.

The 40km bike course consists of 8 5km laps, on a fast, relatively flat, and technical course. The leading group were joined quickly by Van Riel, Mislawchuck, Brownlee, and Japan’s Nener. The group of 9 set out creating a 16 second gap on the first chase pack coming through the end of the first lap, with the second chase pack similarly far back again.

The calibre of athletes in the chase group meant the leaders were caught towards the end of lap 3, with the second chase pack joining them before the half way mark. With 37 athletes in vying for position, Luxembourg’s Zachaus made an effort to go off the front, creating a 5 second gap for himself going on the lap 5; with Schoeman, Brownlee, Van Riel, and Luis, all swallowed up by the group. White remained in the final chase group with seven other athletes attempting to reduce their deficit.

The Norwegian’s and Spanish made the most of their numbers in the group, attempting to reduce some of the load for each other, but Canada’s Matthew Sharpe took this to another level for Tyler Mislawchuck, riding domestique at the front of the group sheltering him directly.

Having taken the win at the Tokyo test event in 2019, and known to perform well in the heat, Mislawchuck was definitely a pre-race contender for a podium position. However, an hour into the race and the list of podium contenders hadn’t gotten much smaller. Although, Pearson received a 15 second penalty for a T1 mistake, while Schomburg and Knabl seemed to get caught up in some type of collision on the bike course. Knabl was forced to withdraw from the race due to mechanical issues from this run in, while Schomburg suffered a 28 second deficit on the main group which he was unable to make back up.

With Zachaus back in the main group, Switzerland’s Andrea Salvisberg was the next to try and break away, creating a substantial 21 second gap as he entered the final lap of the bike course. Despite coming in ahead of the main group, the temperature had risen to 29˚ as the main group swarmed into T2 and began to head out on to the run course.

The mass exit of T2 saw the gap close to 14 seconds as they began the first of 4 2.5km laps on the flat course. GB’s Alex Yee looked strong and in control as he made his way to the front of the run group, leading the way for a number of talented runners such as Studer, Blummenfelt, Mislawchuck, Van Riel and Wilde. All joined by Luis, Brownlee, Schoeman, McDowell, Stornes, Coninx, Bergere and Nener.

Yee continued to push the pace and into lap 2 the group was whittled down to 9 athletes, with Vincent Luis, Henry Schoeman and Tyler Mislawchuck no longer contenders for a podium position with a 12 second gap to make up.

Coninx was the next to show signs of struggling as they headed out onto the third lap, while Alex Yee continued spending a lot of time at the front of the group pushing the pace, breaking it to 6 athletes. Kirsten Blummenfelt upped the pace again in the final lap, further splitting the group, with Yee and Wilde following, attempting to match him, they pulled away from Van Riel and McDowell, with Brownlee clearly struggling to hang on them.

It was Kristen Blummenfelt with the gutsiest run of the day, striding away from Alex Yee and Hayden Wilde with approximately a km to go, the pain clear across his face as he hung on to take the top spot on the podium by 11 seconds over GB’s Yee, with Hayden Wilde securing bronze for New Zealand just 9 seconds back again. Stepping across the line he fell to the floor and needed to be escorted away from the finish in a wheelchair before reappearing to stand on top of the podium.

Ireland’s Russell White finished in 48th position in tough conditions. The Women’s race gets underway at a similar time today. Carolyn Hayes represents Ireland, after an impressive season where she’s taken home silver in the Lisbon World Cup and a powerful 10th place in an incredibly impressive field in the World Triathlon Championship Series, Leeds. 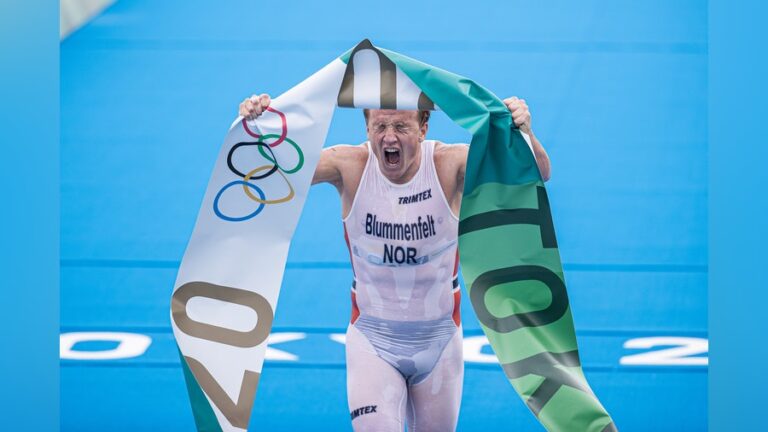