The chaos of the start of the Men’s Olympic Triathlon race wasn’t to be replicated in the Women’s race but there was plenty of drama as the 54 athletes took to the start line in Tokyo. The bottom of the World Triathlon start list contains some key race information such as the Technical Delegates, water and air temperatures, etc. This time there was an additional piece of information reading “Athlete #39 Yuliya Yelistratova/UKR has been removed from the start list because she is provisionally suspended.”

Yelistratova is already a three-time Olympian, with Tokyo set to be her fourth outing on the world stage. However, according to the International Testing Agency (ITA), an in-competition anti-doping control test from the 5th of June at the 2021 Europe Triathlon Cup Dnipro, Ukraine, returned an adverse analytical finding for EPO. The notification was issued to World Triathlon on the 24th of July resulting in her removal from the start list under a provisional suspension.

Additionally, the weather conditions for the race were far from what was predicted by most athletes in their preparation for the event. The 2019 Tokyo Test Event saw the women’s race cut short with the run reduced from 10km to just 5km due to the heat and high humidity. The 6:30 AM start on Tuesday morning in Odaiba Bay was postponed by 15 minutes due to adverse weather conditions as the forecasted Typhoon was downgraded to just a “tropical storm”.

Similar to the Men’s race the day before, there was a long list of contenders for the podium, with any number of scenarios resulting in a different result. Both Nicola Spirig and Vicky Holland returning to the Olympic start line, having claimed silver and bronze respectively in Rio, alongside Flora Duffy, Georgia Taylor-Brown, Jess Learmonth, Katie Zaferes, Summer Rappaport, and Maya Kingma, to name but a few, all strong contenders to make the podium. Ireland’s Carolyn Hayes, wearing number 40, looked focused taking the 42nd spot on the pontoon in her Olympic debut after a strong 2021 season to date.

Jess Learmonth, in traditional Learmonth fashion, powered through the swim, taking an early lead with a small group of athletes managing to follow her and pull away on the first lap from the already stretched-out field. Leaving the water and entering T1 Learmonth was closely followed by Vittoria Lopes, Katie Zaferes, Summer Rappaport, Georgia Taylor-Brown, Flora Duffy, and Laura Lindeman. Emma Jeffcoat was the next athlete out of the water, 30 seconds back on Lindeman, with Spirig over a minute behind the lead group.

Learmonth hammered the pace in the front group in the early stages of the first lap, helping the group build a strong lead on their chasers. The reality of the conditions on the bike course became obvious from the first lap. Several athletes lost control of their bikes at various points during the 8 laps due to the wet roads. The Tokyo Olympic Triathlon bike course is almost flat, and it’s fast, but it’s also incredibly technical. There were several 90-degree corners and a pair of dead turns to navigate in brutal conditions. A number of spills on the course resulted in 8 DNFs, while 12 athletes were lapped out, meaning a total of 20 athletes from the start line did not manage to finish the race.

Spirig largely lead the front chase pack for most of the 40km bike course. The initial 7 athletes in the lead group worked well together keeping just over a minute’s gap. However, Rappaport was the first to fade from the pace set by the group as Duffy, Learmonth, and Zaferes all pushed to keep the gap, with Lopes also fading on the 6th of the 8-lap course.

With the front group down to 5 athletes, all working together to keep the gap, Flora Duffy looked to be the likely favourite from this point, having posted the fastest run split in the recent WTCS in Leeds, highlighting her good run form.

Meanwhile, Spirig continued to carry the chase group, still roughly a minute behind. The race to fill the top 10 places remained just as intense with Spirig, Rappaport, Holland, Kingma, and Klamer all incredibly talented and experienced athletes.

In the final stages of the closing lap of the bike Taylor-Brown appeared to drop back from the group, unable to keep the pace. It later emerged that she had punctured a tyre but managed to safely reach T2 only 20 seconds down on the leaders she had recently lost.

Zaferes lead out of T2 with Duffy, Learmonth, and Lindeman all hot on her heels. While further back Spirig had managed to reduce the gap slightly to just over 60 seconds heading out onto the run. Known for her running ability, the veteran five-time Olympian would still be a threat to some of the athletes ahead of her.

Duffy took the lead early on the run and started trying to pull away. Taylor Brown seemed to hit the run course with a vengeance, motoring back up to catch Learmonth and providing a fantastic display of friendship between the two British athletes by grabbing a second bottle for her teammate Learmonth as they passed the support zone with Learmonth on the outside and too far away to reach.

With 5km to go Duffy had extended her lead to 47 seconds ahead of Katie Zaferes, with Georgia Taylor Brown chasing hard in third position only 5 seconds behind Zaferes. As they entered the final lap Taylor-Brown moved into 2nd place, while Lindeman and Learmonth had dropped back through the field while Klamer and Periault raced hard for what looked to be a fourth-place finish.

A DNF in Beijing, 45th in London, and 8th in Rio; injuries, setbacks, and come-backs. It was Flora Duffy’s day as she powered through the run in 33 minutes to take home Bermuda’s first-ever Olympic Gold medal in her fourth Olympic Games. Having celebrated her way down the blue carpet, she turned to cheer Georgia Taylor-Brown who followed her across the line over a minute later and appeared to be jumping for joy as Katie Zaferes rounded out the podium.

Rachel Klamer ran herself into an impressive 4th place in a sprint finish with Periault, while Nicola Spirig smiled as she crossed the line for 6th in her 5th Olympic Games. Alice Betto, Laura Lindeman, Jess Learmonth, and Belgium’s Valerie Barthelemy completed the top 10 on the results sheet.

Having left the water in 40th position, Ireland’s Carolyn Hayes worked incredibly hard to claw her way back up through the positions. Racing all the way to the line, and leaving us with no doubt she left it all out there, she crossed the finish line in 23rd position.

“Mixed emotions,” she told RTÉ afterward. “I made a hard job of it today, I made a wrong decision at the start of the swim. I just got through the bike and started picking people off in the run, which was really encouraging.

“I’m absolutely thrilled though. If you told me even two years ago I’d be on the start line of the triathlon at the Olympics, I wouldn’t believe you. It’s a dream come true.

“I can’t quite believe it. The Olympics is the pinnacle of all sport, so this really is a dream come true. I only ever wanted to be a doctor so to be an Olympian is a massive bonus.”

The final triathlon event of the Tokyo 2020(1) Olympic Games will take place on the 31st of July from 7:30 AM local time – 11:30 PM Irish time. Ireland will not compete in this event, however, it’s sure to be an exciting race for triathlon fans to tune in to.

The Triathlon Mixed Relay will feature a more compact version of the individual course. The first athletes will begin on the pontoon with a 300m swim in the bay, followed by a 2 lap 6.8km bike. The bike course will differ, crossing the bridge towards Ariake Tennis Park, although it remains technical with several corners and three U-turns. Each athlete will finish their leg of the relay with a 1km run around Odaiba Beach before handing over to the next athlete. 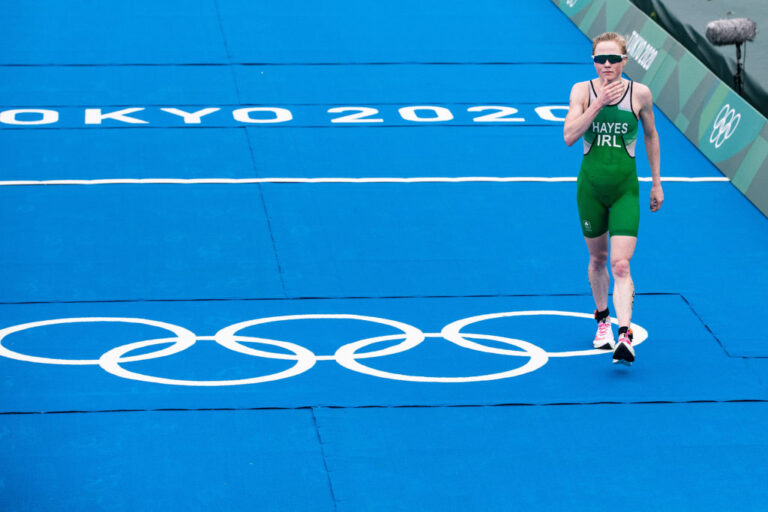