We had hilly in scenic locations like Waterville, Kenmare and Downings. We had flat and fast for National Champs in Tyrone and Rosslare. We had epic swims in places like Kilkee, Ballyhass, Cobh, Valentia, The Liffey, Castlewellan and Hazelwood to name just a few. There were first time winners giving it their best shot and Olympians taking home national titles.

But most of all there was craic, friendship, camaraderie, achievement and through it all a love for triathlon shone bright. This was the 2022 Triathlon National Series.

Ciara Wilson spent her summer touring the country on the hunt for Triathlon National Series points, and her busy seven race season paid off! Starting her season, Wilson announced her intention to push for the series with a second place at Tri795 Carlow and a third at TriAthy.

Her first ever Triathlon National Series win came in June at Skerries Triathlon, just one week after Athy. A step up in distance for July, and Wilson had another convincing win, this time at Base2Race Harbourman in Wicklow against Megan Roberts in second and Aisling Wyer in third.

Next up was the Middle Distance National Champs at TriTyrone, another first for Ciara as it was her debut start at the distance. Finishing third behind IRONMAN pro Hilary Hughes and Kona bound Eithne McGorman signalled a strong result. The depth of the field demonstrated by this being one of Ciara’s discounted points races for the series. Wilson’s third win of the 2022 series was a big one, Dublin City Triathlon (DCT) and coming home almost two minutes from nearest rivals Helen Perry and Danielle O’Riordan. Finishing her season at the hotly contested Pulse Port Beach on the last weekend of the season didn’t add to her tally.

Ciara had secured the big points she needed at DCT to secure her title with a total of 483.984, and win the 2022 Triathlon National Series.

Limerick Triathlon Club’s Kathryn Fahy finished second in the 2022 Triathlon National Series on 481.001 points. Fahy’s biggest points haul came in her first race of the season at Up the Creek triathlon. Her win there earned her 123.717 points. Her final training prep en route to IRONMAN Cork 70.3 in August came at Kathryn’s own club race, Limerick TC’s Hell of the West in Kilkee. A debut at standard distance was certainly not evidenced in her performance as Fahy came off the bike in the top spot and battled with club mate Shauna Doellken on the run, taking eventual second.

Not part of the series, but certainly worth mentioning is Kathryn Fahy’s stellar performance at a hotly contested and atmospheric IRONMAN Cork 70.3 in August. The roars were deafening as Fahy ascended Windmill Hill, made her way on to the run course, and finished an incredible third place.

Back to the National Series and another win, this time at Moby Dick meant that Fahy would need at least one more finish to meet the minimum requirements for the series and, in doing the maths, she must have realised how tight it was at the top. Leaving nothing to chance Kathryn had an epic weekend at the end of the season, taking third at Pulse Port Beach on Saturday and then winning in Ballyhass Sprint Triathlon the next day!

Helen Perry has had a huge year. As well as finishing third in the 2022 Triathlon National Series, TriLimits’ Helen qualified for the IRONMAN World Champs at IRONMAN Switzerland and completed the iconic Kona course just last Thursday in a time of 11:44:00.

Closer to home this summer, Helen began her series in June by winning Sheephaven Half in tough, tough conditions and a battling day. A second place at Crooked Lake Triathlon just a few weeks later earned Perry 119.210 points and from there she wasn’t off the podium in any of her starts.

Second at Top of the Mourne and third at Mourne Triathlon, as well as second place at the Age Group Sprint Champs in DCT gives Helen Perry the third spot on this year’s podium, and 477.017 points. 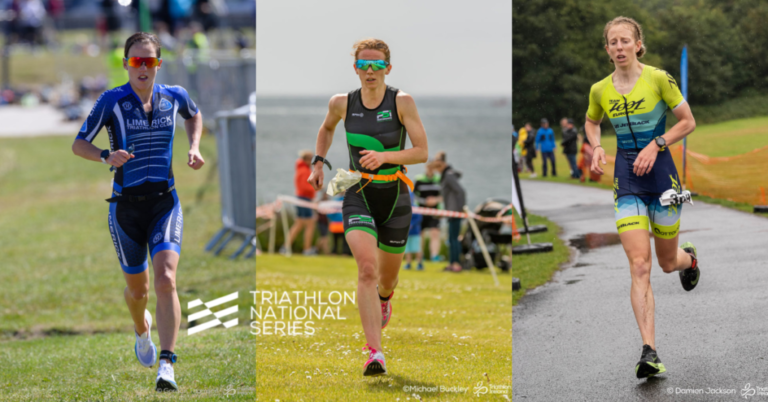