On an opening day, where Daniel Wiffen set a new European Record in the 800m Freestyle, the Irish National Winter Championships got off to a blistering start at the Sport Ireland National Aquatic Centre.

Earlier in the day, Wiffen became the first swimmer in Irish history to break a European Swimming Record, achieving this on home soil, in 7:25.96 for the 800m freestyle.

The first Irish record of the meet went to Ards Swimming Club when they broke their own 4x50m Freestyle Irish Club Relay Record. Ellie McCartney, Grace Davison, Zophia Quigley, and Victoria Catterson combined for a time of 1:44.03.

In the 100m Breaststroke Corby, Andrew Moore and Darragh Greene were the only three under the minute mark to take gold, silver, and bronze, Corby touching first in 58.43 ahead of Moore in 59.62 and Greene in 59.93.

In the women’s 100m Individual Medley Final, Tokyo Olympian Ellen Walshe, returning to racing for the first time in a year, won gold in 59.87 ahead of team-mate Molly Mayne in 1:00.44. Mayne had earlier won the women’s 100m Breaststroke Final in 1:06.21.

Tokyo Olympian Shane Ryan, returning to competition after shoulder surgery earlier in the year, won the 50m Backstroke in 23.61 and UCD’s Jena McDougald took the women’s title in 27.91.

Ellen Walshe looked in impressive form as she added a 50m Butterfly National Title and New Irish Record to yesterday’s 100m Individual Medley title. Templeogue’s Walshe knocked .2 off the previous standard of 26.10, that she had set herself in 2019, touching the wall in 25.90.

Jack Cassin of Dolphin continued his form from yesterday with a new junior standard in the 400m Individual Medley. 18-year-old Cassin knocked over four seconds off his own 2021 record of 4:19.58, coming home for gold and the national title in 4:15.28.

National Centre Ulster and Ards swimmer Victoria Catterson cruised to victory in the Women’s 200m Freestyle Final. Catterson was the only swimmer under the two-minute mark winning gold in 1:58.62. Tokyo Olympian, Finn McGeever claimed the Men’s title in 1:48.77 ahead of New Ross’ Evan Bailey (1:48.88) and Coolmine’s Danny Morgan (1:49.73)

UCD’s Jena Macdougald added the 100m Backstroke title (1:00.03) to the 50m title she won the previous day, Maria Godden (1:00.24) and Danielle Hill (1:00.37) were right behind her for silver and bronze, respectively. National Centre Limerick’s John Shortt won the men’s final, the 15-year-old clocked 54.43 to win his first national title.

The final event of the day saw Molly Mayne add the 200m Breaststroke National Title to her sporting CV. The Templeogue swimmer won her second title in 2:22.97 ahead of Ellie McCartney (2:26.50) and Niamh Coyne (2:26.74).

Róisín Ní Riain set a new World Para Swimming short course record in the S13 200m Backstroke with a time of 2:21.20, shaving off 1.39 seconds from her heat swim and breaking the record she set just that morning. The Tokyo Paralympian swam a time of 2:22.59 this morning in the Women’s 200m Backstroke, setting a new short course World Record, only to come back for the evening session and go 1.39 seconds quicker tonight to set a new World Record. This World Record is subject to ratification by World Para Swimming.

On the back of setting a European record, swimming sensation Daniel Wiffen returned to action to a packed house for the Men’s 400m Freestyle. Wiffen continued his excellent form setting a new Irish Senior Record with 3:38.40, beating the record of 3:41.63, set by Wiffen during his sensational 800m Freestyle performance last Thursday. Finn McGeever (Limerick) clocked 3:48.19 to take the silver medal, with bronze going to Jack Fleming of Lisburn in a time of 3:53.28

The Men’s 100m Butterfly Final served up a thriller as Jack Cassin touched in 53.23 setting a new National Junior Record, a record that was just a few hours old, having been set New Ross’ Evan Bailey (53.52) in the morning heats. Bailey was close behind Cassin in the evening’s final, clocking 53.47 to take the silver medal, while third place and bronze went to Ards’ Charlie Eatwell in 55.45.

The crowd were treated to a thrilling battle in the Women’s 50m Freestyle with National Centre Dublin’s Erin Riordan taking top spot on the podium in 25.00, finishing closely ahead of Olympian Danielle Hill of Larne in 25.13 to take silver; Victoria Catterson took the final spot on the podium with a time of 25.63. In the same race, Ards swimmer, Grace Davison set a new Irish Junior Record with a time of 25.73, beating the existing record of 25.90 held by Mona McSharry since 2016.

Molly Mayne of Templeogue finished first place in the 200m Individual Medley with a time of 2:11.68, The second spot on the podium went to Ards’ Grace Davison who came home in 2:15.66, with third place and bronze claimed by Naomi Trait of UCD in 2:17.05.

Mark Szaranek of won Men’s the 200m Individual Medley Final to claim a commemorative medal, touching the wall in 1:54.27, while Eoin Corby came home in second place with a time of 1:58.60 to take the National gold.

Earlier in the day, Limerick claimed the first titles of the day in the 4x50m Men’s Medley Relay, in a time of 1:41.61. Ards took home a national silver in a total time of 1:44.42, while NAC Swim Club, swimming in their home pool, finished in 1:44.52 to take the third spot on the podium.

The final event of the morning session was the Women’s 4x50m Medley Relay, an Ards quartet of Ellie McCartney, Zophia Quigley, Grace Davison and Victoria Catterson continued their impressive week to combine a total time of 1:55.19 to take the National Title, concluding the morning session.

The Men’s 200m Backstroke kicked off the final session of the weekend, with John Shortt of National Centre Limerick winning his second national title of the week, finishing first in a time of 1:57.73 to take the gold. In second place and taking the silver home was Neddie Irwin of Dolphin with a time of 2:01.57, while Brydan Bryne claimed bronze in 2:03.74.

National Centre Dublin’s Tom Fannon took home the national title in the 50m Freestyle with a time of 21.42, a mere 0.07 outside of Shane Ryan’s Irish Senior Record. Finishing closely behind Fannon was Calum Bain to take silver in a time of 21.47, while bronze went to Matthew Walsh Hussey of NAC Swim Club in 22.64.

The crowd were treated to another titanic battle in the Women’s 100m Butterfly between Ellie McCartney of Ards and Alana Burns-Atkins, with McCartney coming out eventual winner with a time of 1:00.39 to take the national title. Burns-Atkins took home silver in 1:01.14, with bronze going to Sharon Semchiy of Sundays Well in 1:02.94.

National Performance Director Jon Rudd said, “The has been a terrific three days of racing in Dublin, with those in the stands and those watching the livestream getting the chance to enjoy some truly exciting racing leading into Christmas. Pride of place must go to Daniel Wiffen for setting a scintillating European Record for the 800m Freestyle, Ireland’s first ever such record and to Róisín Ní Riain for setting and then breaking again a World Para Record in the 200m Backstroke. We have also seen eleven Irish Records broken at this meet and the depth of racing here has been very pleasing to see. Hats off too to Ellen Walshe for some stellar performances on her return to the racing pool. Next up for us is the McCullagh International in February as we head into the Irish Open in April, our Trials for the 2023 summer international meets. And now back to the training pool from Monday!” 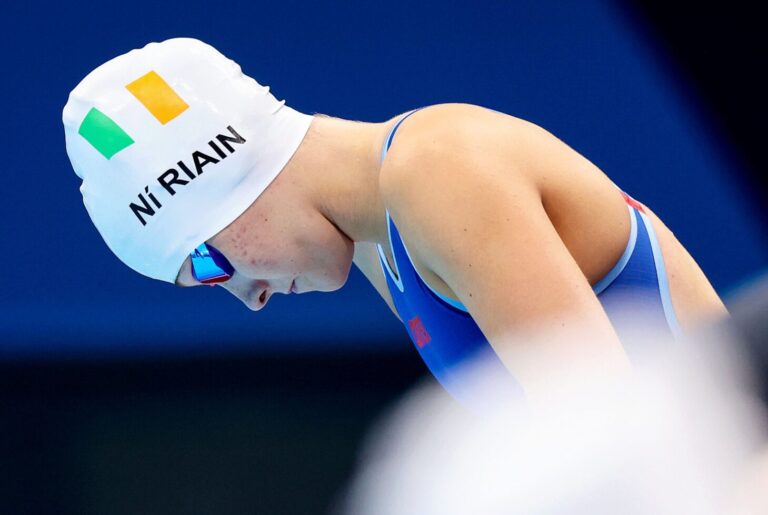