The annual Outsider Awards have returned this year, with some of Tri Talking Sport’s own podcast guests nominated for awards in an event that celebrates all of the amazing achievements, milestones, and contributions that have taken place in the Irish outdoor community over the past year.

You can read all about the full list of amazing nominees HERE. Some categories will be decided by a panel of judges and other categories will be chosen by the public, via a voting system. So make sure to check if your favourite athlete is in those applicable categories, and don’t forget to vote!

On the 14th of January 2022 six Irish swimmers made history when they successfully swam from Ireland to Scotland making the North Channel Crossing in just under 13 hours. The six swimmers led by Ger Kennedy are the first team to swim the North Channel in the depths of winter making it an extreme swim in what is widely regarded as the toughest of all channel crossings. The North Channel relay swimmers have been nominated in the Breakthrough/Newcomer of the Year category with team member David Berry nominated in his own right for his incredible swimming achievements last year.

If you want to re-live some of the stories from their adventure, you can listen to the podcast by clicking HERE.

Meanwhile, Eoin Keith, one of Ireland’s most successful and decorated endurance runners, has been nominated for the Craghoppers Man of the Year award where he faces competition from a number strong contenders for the prize! Eoin joined us earlier this year to provide a podcast packed full of insight into what it takes to go to battle on some of the toughest running races in the world and come out on top! You can listen to the episode HERE.

Former podcast guest, Keith Russell is also in the running for the Man of the Year award. Keith’s running journey started in 2016 with his daughter Alanna, running the Dublin Marathon with her in 2017, capturing and captivating the hearts of the nation as they completed the event together with Keith pushing Alanna in her chair over the 26.2 mile distance. Tragically Alanna passed away unexpectedly just a few weeks later, however, Keith continues to run in her honour and her memory.

The 39 year old Irish international ultra-runner from Navan, Co Meath, has taken the ultra-running world by storm in recent years. He finished second in the record-breaking Race Of Champions Backyard masters in May when he ran 596.834km. Keith went toe-to-toe with some of the best runners in the world, including ex World and European Champions. He then went on to represent Ireland in the 24-hour European Championships, running a distance of 246.711km.

Keith featured on the podcast in 2021  discussing running with a purpose and his love for Alanna in 2021, listen to that episode HERE

Ger Prendergast, the Ultra endurance triathlete from Dublin who suffered from sight loss in one eye at a young age due to an accident, has not let this get in the way of achieving success in sport personally and professionally inspiring, encouraging and motivating his family and the wider community to strive for more through sport.

The winner of the Deca UK in 2017, Ger completed 52 long distance triathlons in 2018 which included a double, a continuous triple, a quinn and an indoor deca distance as part of his 52 in 52 challenge for Mental Health Ireland.

Ger was on the podcast with us back in May 2021, he’s also nominated in the Man of the Year category for his win in the continuous Deca triathlon. This epic challenge involves a 38km (24 miles) swim, 1,800km (1,120 miles) cycle, and a 420km (262 mile) run, all completed one after the other with no significant breaks. You can revisit our chat with Ger by clicking HERE.

Another Tri Talking Sport podcast guest is also featured in the Man of the Year category, Galway-man Damian Browne a former professional Leinster rugby player turned adventurer. In June 2022, Damian set off from Manhattan in the United States with the objective of completing a world-record row across the Atlantic.

On Tuesday, June 14 at 03:10 am, alongside his friend Fergus Farrell, Damian began his long journey east towards Galway. Their objective was to complete the 5000km row from New York to Galway in 55 days. Unfortunately, Fergus had to be evacuated from the boat on day 13 due to a medical emergency. This left Damian on the boat by himself with an incredibly daunting task ahead of him, a situation he had experienced before when he completed a solo Atlantic Row in 2017.

Damian has bee on the podcast with us twice, for the first time in 2019, you can listen to that episode by clicking HERE. Joanne also spoke to Damian and Fergal before their New York to Galway expedition last year, you can tune in to that episode HERE!

The overall winners will be crowned at the Outsider Awards event at the Sugar Club in Dublin on 1st February. Tickets are on sale now but are very limited, so snap one up before it’s too late. At the event,  Outsider will also celebrate Ireland’s incredible natural assets by hosting a panel discussion on Ireland’s outdoor spaces and how to protect them. This panel discussion will be supported by Leave No Trace.

Check out the Nominees Below And Make Sure You Vote

Click HERE to read about the categories and nominees.

Best of luck to all nominees! 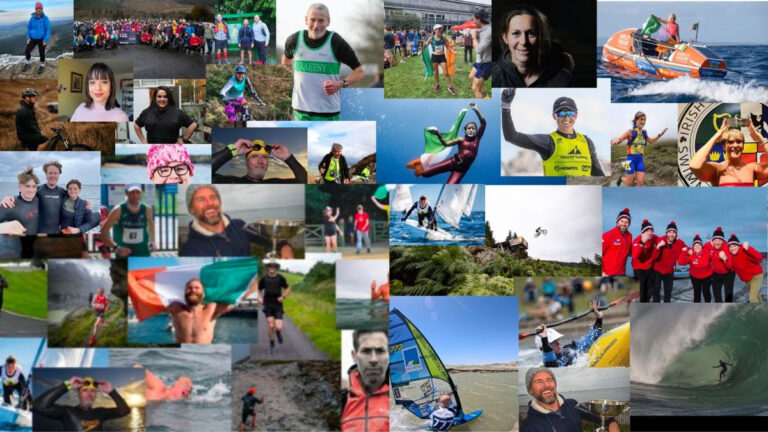